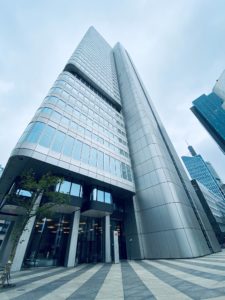 The fact that German lender Helaba was willing to be sole underwriter of a senior loan to finance the circa €700 million purchase of one of Frankfurt’s most prominent office towers demonstrates that the buyers of core, ‘trophy’ assets in the German market are unlikely to face issues securing finance, despite the market uncertainty caused by covid-19.

On 12 April, the bank announced it had financed the acquisition of the Silberturm skyscraper in Frankfurt, which had been acquired by a joint venture between Austrian family office Imfarr and Swiss investor SN Beteiligungen through a share deal. According to Helaba, the deal was agreed in December 2020 but not completed until March 2021. The seller was South Korea’s Samsung Group, which acquired the building in 2014.

The senior loan was provided last month to fund the acquisition, which has been reported as one of the largest real estate purchases in Europe since the onset of the pandemic.

The size of the loan was not disclosed. According to real estate finance advisor BF.direkt, the average loan-to-value on a senior loan in the German market was 66 percent in Q1 2021, although it said the range is wide, beginning at around 40 percent. Law firm DLA Piper, which advised Helaba on the financing, said in a press release that, in addition to the senior financing granted by the bank, funding was provided through a structurally subordinated mezzanine line.

According to Fritz Müller, head of real estate finance for Germany’s regions at Helaba, many lenders were interested in financing the asset. “Competition for the transaction was really hot,” he said. “Banks are keen to finance trophy buildings, like the Silberturm tower. We succeeded because we have a good relationship with the two parties acquiring the building.”

Manuel Köppel, chief financial officer at BF.direkt agreed that lenders like Helaba are competing to finance the market’s highest-quality assets. He said: “Since the coronavirus crisis, banks have shown greater risk aversion and are focusing more on safe core properties with long-term leases. Since all banks are doing this in more or less the same way, competition in this segment is increasing.”

Silberturm sits in Frankfurt’s central business district, between the main railway station and the banking district, which, according to Müller, was key to the bank’s decision to provide the financing. “There are around 200 metres between the Helaba tower and the Silberturm tower. We know the surrounding area very well, which made us feel very comfortable.”

The quality of the asset and the fact it was fully leased to the German railway company Deutsche Bahn, described by Müller as a strong tenant with good credit, also underpinned the decision to back it.

Müller added that Helaba is in early talks to syndicate the loan, for which he expects strong demand from domestic lenders. “Our strategy is to distribute the loan between our owners, the savings banks here in Germany and among other German real estate banks.”

Müller added that the bank remains confident about the long-term recovery of the office sector. However, due to the many questions the pandemic has generated around future use and demand, he explained the bank is requiring further information from sponsors when underwriting office assets. Key considerations include the asset’s tenant profile and a proven track record from the sponsor with similar properties, he said.

“In metropolitan areas, and more specifically in central business district sectors, we predict good demand for office space,” he said. “However, we are cautiously considering the short-term impacts the working-from-home trend is having on the sector but, in the long term, we are confident on its recovery.”

As at December 2020, around 45 percent to 50 percent of the bank’s €36.3 billion commercial real estate loan book was allocated to the European office sector.

“Generally, we are open to financing assets in the office, logistics, residential but also in the retail sector, because we tightened our retail strategy in 2019, so we feel comfortable with it now,” said Müller. “If financing retail assets, we cannot provide loan-to-value or loan-to-cost above 60 percent,” he added.