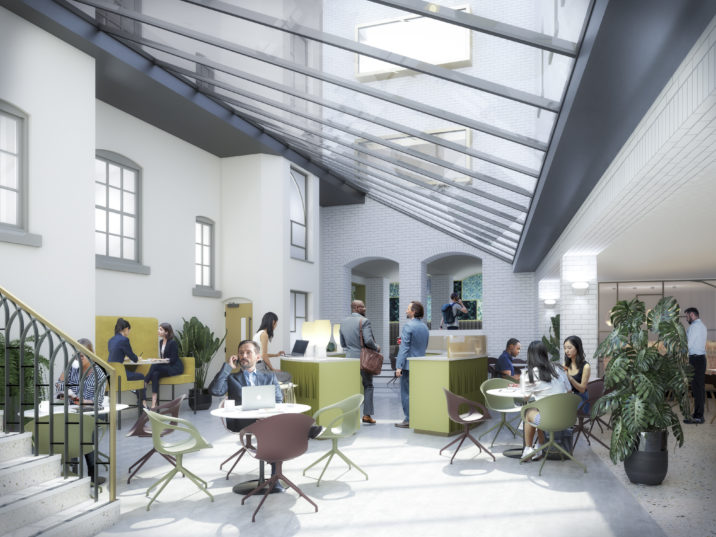 Sourcing finance to redevelop dated office buildings in the regional UK city of Birmingham into a new co-working scheme was a challenge, according to the project’s developer Cervidae.

The London-based, family-owned property company recently began work on combining three Grade II listed office buildings on Colmore Row, in Birmingham’s business district, to create 26,200 square feet of flexible office space, plus 7,400 square feet of offices for traditional lease. The scheme, which is due to complete in early 2022, will also contain a gym, a roof terrace and a central courtyard with events space and a bar.

On 25 March, Cervidae closed a construction loan with the UK specialist property lender ASK Partners. The loan size was not disclosed, although, according to ASK’s website, it has written loans ranging from £3.3 million (€3.8 million) to £65 million, with a £20 million typical deal size and terms of 12 months to three years.

Cervidae originally sought finance in Q2 2020, during the first wave of the covid-19 pandemic in the UK and agreed a deal with ASK mid-last year. However, Cervidae subsequently revised its construction plans, delaying the close of the deal.

According to Alex Hamilton, chief financial officer at Cervidae, a limited pool of lenders was willing to back the project. “We committed to the plans early in the covid-19 pandemic when many lenders had retreated to core products,” he told Real Estate Capital. “If you put together the words covid-19, speculative, co-working and regional, that did not open many doors.”

Cervidae did not have a contract with a co-working operator in place when it went out to seek finance. Instead, it plans to co-manage the asset with a flexible workspace operator through a joint venture, rather than lease the space outright to a third-party operator. According to Hamilton, the fact that the scheme is being developed speculatively resulted in Cervidae being quoted higher debt pricing.

“If we had a long lease to a secure co-working operator, the covid-premium would most likely have been 50 basis points [on the margin] because the co-working lease can be evaluated as any other traditional property type,” Hamilton explained. “However, the pandemic crisis probably added 100bps-plus for a speculative development at such uncertain times.”

The lack of a pre-let for the adjoining traditional office space also deterred lenders, he said. Despite having received strong interest from different operators, he added, the company decided to build speculatively under the conviction that better leasing terms could be secured closer to the project’s completion.

Hamilton said ASK was willing to offer the flexibility the transaction required. “Due to covid-19, lenders were and still are more hesitant about their credit requirements. This flight to safety left us reliant on a lender taking the time to see the value of the underlying real estate rather than simply looking at a credit checklist.”

In recent years, several real estate lenders have proved willing to lend against offices leased to co-working operators, particularly in major markets such as London. However, the near implosion of WeWork in 2019 and the impact of the pandemic on working practices has tested lender appetite for the sector.

According to Hamilton, who before joining Cervidae was corporate finance lead at UK developer Argent, the overall supply of debt to the co-working sector remains limited, for completed assets as well as to fund development.

“Co-working is an operating business that lacks the income security that workspace with traditional leases in place provide,” he explained. “Lenders have traditionally placed too much reliance on the security of a lease, but some are starting to realise that, if a building is not performing well, it does not matter what the lease says, it is going to collapse. They need to look more at the underlying health of the operating business.”

Hamilton added that many lenders are reluctant to offer sponsors the flexibility this type of space needs.

“Traditionally, lender consent is required to grant licenses or to change rentable value. But in a serviced office you need more flexibility. In this project, we will have nearly 500 desks, so we might be doing deals every single day. It is not practical to wait for a bank to get back to us when end-users expect dynamism and flexibility.

“Many operators will also want flexibility around desk price to fill short-term vacancy at a discount. You cannot have the minimum thresholds that lenders normally require in a market like this one.”

Operating expenses represent another mismatch between lenders’ requirements and the sector’s needs, he said. “Traditional structures where money is locked up present significant barriers for this kind of project, because you have a business to run and daily expenses to fund.”

Although Hamilton believes lenders are still getting to grips with the co-working sector’s characteristics, while also waiting to see the full impact of the pandemic on offices, he predicts more debt providers will gradually become willing to finance the sector.

“Lenders should look at co-working financing in a more fundamental way, putting a greater emphasis on the quality of the underlying real estate, the capability of the operator and the value of their security if the asset can be re-let as traditional office space,” he added.

Hamilton believes the pandemic has presented the co-working industry with an opportunity to capitalise on occupiers’ changing patterns of demand. “In the short-term, covid hit flexible office space harder because it was easier for companies to cancel their licenses and because social distancing rules forced co-working operators to reduce the number of desks at their sites.

“But these are short-term factors, the sector will rebound. The pandemic has reinforced the role of the office as a place for employees to collaborate, innovate and socialise.”