“Today, I am starting to behave aggressively. Everything we deal in is significantly cheaper than it was six or 12 months ago”

Howard Marks, co-founder of manager Oaktree Capital and a major investor in debt, speaking to the Financial Times on why it is a good time to snap up bargains. Read the full article here

Locking in rates
As real estate companies ponder the impact of the rising interest rate environment on their finances, some are opting to lock in today’s rates for several years. Last week, logistics giant SEGRO announced [see here] it had arranged a €225 million US private placement debt issue with a group of institutional investors, featuring 15-year and 20-year unsecured notes with a weighted average coupon of 4.09 percent and a weighted average maturity of 19 years. At the end of May, SEGRO’s average debt maturity was 8.6 years, up from 7.8 years at the end of March.

Soumen Das, chief financial officer of SEGRO, said the long duration of the new notes represented an endorsement of the company’s strategy. “It will have a marginal impact on the average cost of debt, while increasing the percentage of debt which is at fixed rates at a time of interest rate volatility,” he said.

Mizuho makes UK plans
Japanese bank Mizuho is planning to ramp up its real estate financing activities in the UK, according to React News. The news service reported it is on the hunt for a UK managing director for its real estate finance division, to work closely with John Feeney, the former head of real estate lending at Lloyds Bank, who joined Mizuho as European head of corporate finance in 2020.

The plans suggest the UK real estate lending market remains attractive to overseas banks, despite economic and political headwinds. Mizuho is already active in the US market, but its UK activities have thus far been limited to participating in revolving credit facilities and syndications. It now has the potential to make its mark.

Defining quality offices
Location has become more critical to lending decisions since the onset of the pandemic, according to Cain International. The private investment firm this week announced it has issued an £86 million (€100 million) loan to private equity real estate firm BauMont Real Estate Capital and developer YardNine for the speculative development of Edenica – a sustainable office scheme at 100 Fetter Lane in central London, close to stations that provide access to the city’s recently opened Elizabeth Line.

This week, Tanja Yerolemou-Ennsgraber, senior vice-president for real estate finance at Cain, told Real Estate Capital Europe that proximity to transport links was essential to the definition of a best-in-class office asset. “The building should be as easily accessible as possible,” she said. “Since the pandemic, people now want to spend less time commuting. The location and surrounding amenities are now what defines quality product.”

Sustainable data
Germany-headquartered real estate manager Patrizia has seen an 18 percent increase in the number of its institutional investors using ESG data in their real estate decisions. In a survey released this week, the firm said 76 percent of the 100 institutional clients that participated now capture and use ESG data when making decisions.

Mathieu Elshout, head of sustainability and impact investing at the investment manager, said new EU targets to curb climate change had “started to impact portfolios”. He added: “Transition risk is coming and the evidence shows regulation is becoming tighter. As a result, investors are more aware and we will see that continuing.” Keep an eye out for full coverage of the survey.

Measuring impact
In a new report [membership required], industry body the Urban Land Institute and law firm DLA Piper argued that social impact investing can apply to all real estate and become best practice over time. More than half of interviewees active in impact investing agreed the pursuit of impact objectives has a natural alignment with financial objectives because it delivers risk management. Not all are convinced though, with 22 percent on the fence and 24 percent disagreeing with the premise. 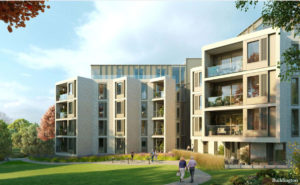 Later living loan
High-end residential targeted towards retirees is growing in popularity among sponsors and lenders. Last week, London-based development lender Précis Capital Partners announced it had provided an £80 million (€93 million) whole loan, in partnership with US manager Carlyle’s global credit platform and Japanese lender Nomura, to EPISO 5, a fund managed by Tristan Capital Partners. The facility will be used to finance the development of The Oren, a premium later living development in Hampstead, north London.

The scheme will feature 46 units, a gym, spa, restaurant and bar area. It will be operated by UK firm Elysian Residences. David Jerrard, chief credit officer at Précis, said: “This financing will help tackle the chronic undersupply of purpose built later living housing within the UK retirement market.”

Today’s Term Sheet was prepared by Daniel Cunningham, with contributions from Lucy Scott