QuadReal has committed up to £1 billion to the strategy. Speaking to Real Estate Capital Europe, Precede’s chief executive Randeesh Sandhu said the firm – which has had a UK focus since inception in 2021 – is seeking financing opportunities in European jurisdictions including Ireland. However, due to rising construction costs, Sandhu said the firm’s focus outside the UK may be on financing existing residential assets.

NPLs under the hammer
Non-performing loan portfolios will be cropping up for sale in the coming weeks, according to Bloomberg, which predicts that, following year-end appraisals, lenders will act quickly on breaches of loan covenants and valuation declines. Goldman Sachs may be pre-empting this by bringing its own NPL sell-off to the market.

The US investment bank is reported to be close to selling a €500 million portfolio of its remaining Spanish NPLs and real estate-owned assets, according to React News. This follows the December sale of an NPL portfolio with a gross book value of €1 billion, to the asset manager LCM Partners. The sale of the Spanish NPLs, in a process called Project Ace, is at an advanced stage, said the trade publication. It reported there are bids from London-headquartered private equity investor Metric Capital Partners alongside Albatris, an alternative investment firm – which have invested in Spanish distressed debt before – as well as a bid from Bank of America.

In the past two years, Berkadia has originated more than $75 billion of commercial loans. Neil Brookes, global head of capital markets at Knight Frank, told Real Estate Capital Europe it will use the alliance to source debt for its European clients. “This will be where we are mandated by UK and European clients to raise debt for them, and we may source this debt from US providers through Berkadia’s relationships,” he explained.

Neo’s UK debt debut
Yet another organisation is taking a first step into the European alternative lending market. Dubai-based Neo Capital, which manages capital for Middle Eastern investors, is set to originate its first European property loan. The $1.2 billion asset manager will provide a loan of around £30 million to a London-based developer to fund the redevelopment of prime London residential assets.

Alyas Al Meftah, Neo’s head of investment placement and relationship management, said the firm sees an opportunity in the lending market because traditional lenders are taking too long to process financing requests, which has a detrimental effect on acquisitions. The firm sees this gap as an opportunity to provide finance quickly.

Dispatch from Davos
Last week, Ivanhoé Cambridge chief executive Nathalie Palladitcheff shared her thoughts on the challenged office sector during a real estate panel at the World Economic Forum in Davos, Switzerland. “Office is probably both a blessing and a curse,” she said.

The property type’s challenges have already been widely discussed, but Palladitcheff considers the issues to also be a blessing because of how they are forcing the industry to tackle the question: “How do we be a solution instead of a problem to the world, because we’re a very big carbon issuer?”

One opportunity stems from converting obsolete office assets to housing. “The only common thing we see really everywhere is housing, the supply and demand discrepancy that we see in every country, every city around the world,” she said. “The problem is that there is not one recipe that we can replicate everywhere to solve the problem. It is really varied depending on the local authorities.”

There may be trouble ahead
The “worst is yet to come” for European real estate, says Oxford Economics, which warns in a research briefing that the best buying opportunities are “not just around the corner” on account of increasing debt costs, which it forecasts will culminate in a eurozone all-in interest rate of 3.7 percent for a hypothetical portfolio by the end of 2025.

The economic advisory firm said there will be a lagged impact of higher debt costs since approximately only 20 percent of total outstanding debt gets refinanced each year. The report’s author, Mark Unsworth, told Real Estate Capital Europe: “The gradual impact of the ramping up of higher debt costs on portfolios is a limiting factor for a quick recovery. Not all debt gets marked to market in one go and so this will take a long time to play through.”

Downing’s BTR finance hire
London-based investment manager Downing has added to its property finance team, with the intention of increasing its focus on the UK’s build-to-rent residential sector. The manager has hired Bruno Lobo [LinkedIn here], who was previously co-founder and managing partner of investment platform S+A Capital, as investment director in its property finance unit.

Lobo began his career at manager Brookfield’s global real estate group in New York, before becoming a founding director of Latin America-focused developer Avenida Capital. At Downing, he will deploy investor capital to fund BTR projects. In total, Downing’s property finance team has made £300 million in commitments in the UK market. 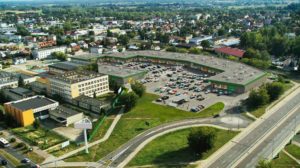 The five-year loan, which is Dusseldorf-based Trei’s first from the German lender, is being issued in two tranches: the first €27.8 million was issued in December 2022 and the remaining €12.2 million will be issued in December 2023. The facility is secured against eight retail parks, either recently completed or under development, which form part of the developer’s Vendo portfolio, which comprises retail assets in Poland, Czech Republic and Slovakia.

Maria Teresa Dreo-Tempsch, head of markets at Berlin Hyp, said: “Trei is one of the biggest developers of retail parks in Poland and was able to keep expanding its portfolio last year.”