“In my 30-year career, I’ve never seen real estate fundamentals in the sectors where we are focused as strong as they are today.”

The third wave
Oaktree Capital Management has just closed its biggest real estate credit fund to date, but it is already well on its way to deploying the $3 billion vehicle. The Los Angeles-based manager tapped Real Estate Debt Fund III to scoop up discounted debt securities during the early days of the pandemic and take advantage of the broader capital market reluctance to lend into New York and other gateway cities in 2021. With roughly $1.4 billion left to put to work, Justin Guichard, co-portfolio manager for Oaktree’s real estate debt and structured credit platform, believes another round of volatility will create bargain buying opportunities in 2022. To find out why, see our full coverage here.

Ares enters the fray
There was further evidence last week that big-name investment managers want a slice of Europe’s real estate lending market. Los Angeles-based Ares Management Corporation announced the formation of a European real estate debt team, a first deal for the team in Belgium, and the promise that it would provide ‘flexible’ capital to borrowers in the European market. Ares knows real estate debt, having invested in it for a decade in its home market. It also knows European real estate, having been an equity investor in it for 25 years. Philip Moore, who has joined from Carlyle to lead the team [his LinkedIn here] said he and the rest of the team are joining Ares at a “pivotal time for our industry and the evolving market landscape”. To find out more about Ares’ push into Europe’s real estate lending market, see our coverage here.

Sustainable credit
Two financing deals in the last week show sponsors are eager to benefit from favourable financing terms by pegging them to sustainability performance. In the first, UK-based manager Europa Capital sourced a €210 million sustainability-linked facility from bank RBS International. The loan was for its Europa Fund VI value-add fund, in which there are margin incentives conditional on sustainability-linked targets, including improved waste diversion, the use of green energy, and minimum EPC ratings of C for the fund’s major refurbishment and redevelopment projects [see here]. In the second, Singapore-based Frasers Property sourced a £110 million (€132 million) sustainability-linked loan from Maybank Singapore that features a reduction in interest margin from its second year if it maintains its four-star GRESB rating [read more here].

A record haul
On the equity side of the industry, while investors anticipate the arrival of Blackstone’s latest global opportunity fund mega-raise, the New York-based manager continues to break the mould with its focus on perpetual capital. Blackstone‘s signature open-ended strategy, its unlisted BREIT, attracted $9.9 billion in the last three months of 2021, a record for the five-year old vehicle. In 2021 as a whole, BREIT has more than doubled in net asset value, Jon Gray, president and chief operating officer, told investors on the firm’s earnings call last week, reaching $54 billion. BREIT, buoyed by an over 80 percent allocation to residential and logistics assets, was also Blackstone’s largest contributor for earnings last quarter, posting a 30 percent net return.

Finishing strong
Private real estate fundraising ended 2021 on a high note, with $175.7 billion of capital raised – the third-highest full-year total since affiliate title PERE began tracking fundraising data in 2008. It was a robust finish to a year that started slow, with the first six months going down as one of the lightest ever recorded by PERE. Only about 15 percent of the capital raised was earmarked for debt or mezzanine funds, a dip from the 19 percent seen in 2020. Still, a key takeaway for debt specialists is that their equity counterparts are sitting on a mountain of dry powder, which will ultimately translate into lending opportunities.

Houses of the rising sun
As climate concerns continue to dominate the real estate investment conversation, residential assets are likely to be at the forefront of the discussion moving forward. According to a report by Heitman and the Urban Land Institute, climate migration – the concept of people moving because of weather events – will have a major effect on real estate demand, with where people live as the first domino to fall. “We have talked about residential being the ‘canary in the coalmine,’” one investor said in the report. Dynamics in residential are putting ownership out of reach, meaning the market could become dominated by renters. While great on the face of it for institutional owners of residential, those same owners will be in possession of a larger share of the climate risk from an insurance perspective. “Tenants do not hold significant amounts of property insurance relative to owner-occupiers,” the report said. 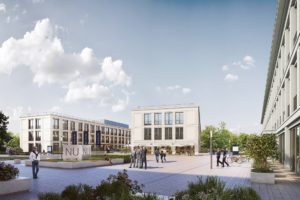 Nu offices
German bank Berlin Hyp proved some lenders remain keen to finance the next generation of office space. It announced this week that, alongside savings banks Sparkasse Landshut and Sparkasse Rottal-Inn, plus another unidentified savings bank, it provided €70 million to fund the construction of a new office building for DBV Businesspark in the Bavarian university town of Regensburg [full announcement here]. The savings banks took a €30 million participation in the deal.

The property is the fourth and final phase of the business park in the Dörnberg area of Regensburg and is to be called ‘Nu Work’. The bank said the offices can be divided into two to four units per floor and are available with various floorplans. Flexibility, it seems, is a key selling point of the scheme.