“Now that the office sector is challenged by the pandemic, financing properties combining workspace with lab space is perceived by more lenders as a way to de-risk.”

Ultimatum time for Deutsche Wohnen shareholders
Lenders in the creation of what would be Europe’s largest residential M&A deal might be feeling uneasy after Rolf Buch, Vonovia’s chief executive, said on Monday its latest offer for Deutsche Wohnen would be its last. “Whoever wants this deal, and I believe that the market wants it, should tender as many shares as possible as quickly as possible now so that we reach the 50 percent threshold,” he told Reuters.

After failing last month to pass the 50 percent threshold with a €52-a-share bid, Vonovia announced on Monday it had launched a new takeover offer worth €53 per Deutsche Wohnen share, valuing the company at €19.1 billion. Under the offer’s terms, Deutsche Wohnen shareholders have until 20 September to tender their stock.

The combination of the two German-listed groups would create Europe’s largest residential real estate company, with a total market capitalisation of approximately €45 billion and more than 500,000 apartments, with an aggregate value of around €90 billion. As such, its completion would represent massive business for the consortium of lenders understood to be backing the transaction, including Société Générale, Morgan Stanley and Bank of America.

Lenders support office transition
The future of the office sector remains uncertain, but what most debt providers seem to agree on is that offices will prevail if they adapt and improve. The latest lending moves across the European office sector suggest lenders are getting increasingly comfortable funding its upgrade.

Earlier this week, German bank Berlin HyP announced it had provided, alongside two German savings banks, a 10-year loan to a fund managed by HanseMerkur Grundvermögen AG, aimed at supporting the renovation of an office and commercial building in Düsseldorf, Germany. Meanwhile, CBRE Global Investors, through its credit investment platform, provided last week a £36 million (€42 million) loan to fund the acquisition, and subsequent upgrade, of an office building in Edinburgh. The loan was provided to Edinburgh-based manager Odysseus Capital Management which, on 10 August, acquired Edinburgh One from the German investment fund Deka Immobilien Investment GmbH for £22 million and plans now a major extension and redesign for the building.

Archway fund aims to provide longer-term debt
Archway Capital, a Los Angeles-based bridge lender, took a major step towards building its short-term real estate lending business via a new fund that will allow it to originate longer-term first mortgages, mezzanine debt, preferred equity and co-GP equity. Via its Rockford platform, Archway believes it can tap into a liquidity premium in the capital structure, Tom Noble, senior vice-president and chief operating officer, told Real Estate Capital. “We will evaluate opportunities on a deal-by-deal basis with the aim of figuring out how we can hit our return target with the optimum amount of risk,” Noble said.

Oxford Properties last week took a step closer to its stated aim of having one-third of its real estate be industrial by buying 149 infill and light industrial assets in the US from New York private equity giant KKR for $2.2 billion. The property investment business of Canada’s Ontario Municipal Employees Retirement System had invested in the assets before – previously as a lender of junior finance to its seller in the deal. Chad Remis, executive vice-president of North America, said the deal demonstrated the “power of Oxford’s fully integrated credit business” for driving investment synergies and attractive returns. He added: “Having previously been a mezzanine lender on the portfolio acquired from KKR, we have a high degree of conviction on the growth potential of these assets.”

London offices empty out
Vacancy rates in the City of London have risen from 5.3 percent in March 2020 to 9 percent in June this year, according to Savills. 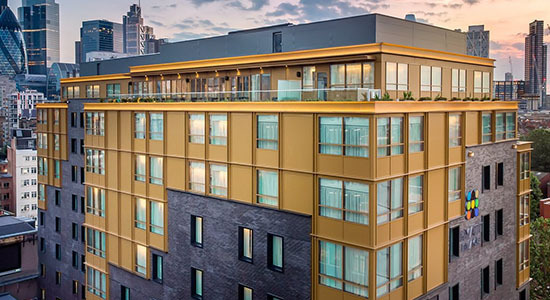 UK hospitality receives further confidence boost
If you are looking for more signs of the hotel sector’s comeback, look no further than the £85 million (€99 million) refinancing provided last week by the private equity firm KSL Capital Partners to an affiliate of manager Resolution Property for the Hyatt Place London City East hotel in London. The refinance of a development facility secured on a modern hotel in the east of the city is one of the latest examples reflecting that, amid widespread caution, the UK hotel lending market is showing green shoots again.

On a note announcing the transaction, Chris Gown, executive director, debt & structured finance, at property consultancy CBRE, which advised on the deal, said: “The transaction demonstrates renewed lending appetite for assets benefitting from a combination of strong real estate fundamentals, established sponsors and an attractive brand.”

Opened in July, the Hyatt Place London City East hotel is a 280-bedroom hotel in Aldgate, close to London’s financial district. It features a ninth-floor roof-top bar and terrace, two flexible event spaces, an inner courtyard, a gym and a grab-and-go food market.