“We do not anticipate a large amount of distress in the market.”

Kinetic reenergises its PBSA drive
When Kinetic Capital, the UK-based lending business, launched in July 2020 it did so with a very focused target – funding purpose-built student accommodation schemes (read our December 2020 interview with co-founder and chief executive Steve Grant here). The specialist lender announced last week a new lending programme through which StepStone Real Estate, the property arm of US private markets firm StepStone, will provide capital to target at least £200 million (€234 million) of PBSA loans in the UK and Ireland. It marks Kinetic’s first capital raise since it launched with an initial £100 million commitment, and hints at the popularity of Europe’s student housing markets to institutional capital. An April report by consultancy Savills (read it here) revealed 2020 was a record-breaking year for the UK PBSA sector, with £5.8 billion of investment – a vote of confidence by investors despite the disruption caused by covid in the university sector.

Tikehau closes oppo fund
Although distressed real estate situations remain limited in European markets, managers of opportunistic capital continue to find deals into which to deploy. Among them is Tikehau Capital, the Paris-based alternative asset manager. It announced on 26 July (see here) that it had surpassed its €500 million target to close its Tikehau Special Opportunities Fund II on €617 million. The fund is not designed specifically for real estate lending – indeed, its flexible mandate allows its managers to target “corporate and asset-backed” solutions across European credit markets, ranging from rescue loans to corporate liquidity financings. The vehicle was launched in 2019 and Tikehau said the pace of deployment “increased substantially in 2020 following the onset of the covid-19 pandemic”. It added that the team, which has a wide remit across credit, has more recently focused on private situations across real estate and corporate credit.

Netherlands in demand
Several of the loans announced in the past week, collected in our lending database, which is uploaded weekly (subscribers can access it here), were secured by real estate in the Netherlands. They included: an €84.4 million residential portfolio financing by German bank Berlin Hyp; a debut loan for French manager Acofi Gestion’s real estate impact debt fund, secured by a Dutch office building; QSix Real Estate Finance’s first Dutch deal with a €25 million acquisition loan for four hotel and hospitality properties; and a loan provided by Edmond de Rothschild Real Estate Investment Management to refinance and refurbish two office properties at the District West complex in Amsterdam. The Netherlands, which Dutch bank Rabobank said in a June research report is making a robust economic recovery from the covid crisis, is popular with real estate lenders. In a Real Estate Capital article this month, Stefan Prince, real estate finance director at MetLife Investment Management, said the “structural repositioning” of the country’s office sector over the past five years, coupled with the country’s macroeconomic recovery, have helped deliver an attractive and sustainable office market (read more here).

Barrack pleads not guilty
In the US, headlines were made last week when Tom Barrack, founder of private equity real estate firm Colony Capital – a major investor across equity and debt markets – and long-time ally of Donald Trump, was arrested on federal charges of illegally lobbying the former US president on behalf of the United Arab Emirates. On Monday, Barrack pleaded not guilty in a court in Brooklyn, New York (read more here, courtesy of CNBC). In its Friday Letter last week, affiliate title PERE said the arrest was expected to have a limited impact on the firm, which is now called DigitalBridge and which has gone through significant changes in the past year that have effectively created as much distance as possible between the firm and its founder. Read more about PERE’s take on the dramatic news here.

Retail rebound?
According to Knight Frank data, investment in UK retail property reached £2.7 billion in the first half of 2021, up 80 percent on the same period in 2020. Activity in the first half was driven by increased investor demand for retail warehousing, with transactions exceeding £1 billion, and food stores, which saw £780 million of investment in the period. 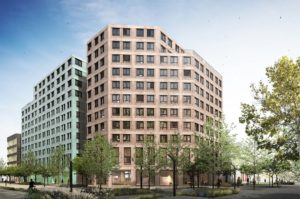 Building in Barcelona
The London-based private equity real estate firm Henderson Park and US property investor Hines have secured financing for the construction of a 350-bed student housing scheme and a 38,000 square foot office building in Barcelona, which are due to complete in 2023 (see the announcement here). French corporate and investment bank Natixis provided the joint venture partners with a €27.5 million development loan for the two schemes, which are located on Carrer de Cristóbal de Moura – in an area of the city which features university campuses and is subject to regeneration projects. The JV already has a separate student housing scheme underway nearby. With the current focus on real estate being built to high sustainability standards, the JV stated that they are aiming to secure LEED Gold and WELL ratings for both the student homes and the offices, as well as obtaining WiredScore certification for the offices – which measures the quality and resilience of digital infrastructure.