“To achieve our collective global climate goals, it is essential to unlock the trillions in private finance that are needed to transition towards a net zero economy.”

Green commitments
Two of Germany’s major real estate lending banks this week went public with their latest efforts to green their property loans. On Monday, pbb Deutsche Pfandbriefbank said it was expanding its product range to offer green loans to real estate investors and developers [read its announcement]. The bank, which has been funding part of its lending business with green bonds since Q1 2021, said it now has an established framework for sustainable lending. It involves a proprietary scoring system, across three categories – energy efficiency, building certification and additional sustainability factors, devised in line with the new EU Taxonomy. Properties can score up to 100; above 60 means they qualify for a green loan.

Meanwhile, Berlin Hyp – which already has a track record in green real estate loans and pioneered the Green Pfandbrief – unveiled its ESG vision, defining its sustainability goals. It is aiming to be completely carbon neutral by 2025, with an interim target of reducing the carbon footprint of its loan portfolio by 40 percent by 2030, compared with 2020. Such commitments show Europe’s major real estate lenders recognise the need to use their lending to promote sustainability.

A sign of recovery in hotels
London-headquartered private equity real estate firm Henderson Park has agreed to acquire a portfolio of Hilton hotels across the UK and Ireland. Debt for the deal is being provided by the credit unit of US private equity group Apollo Global Management. The deal, expected to close later this year, demonstrates equity and debt providers’ confidence in the strength of the UK’s travel sector recovery. According to data provider STR, average UK hotel occupancy hit a low of 21.9 percent in April 2020 but recovered to 71 percent in August, boosted by domestic holiday demand.

Henderson Park is adding 12 hotels to its portfolio, comprising 2,424 rooms spread across London, Edinburgh, Glasgow and Dublin. According to the Financial Times [subscribers can read here], the portfolio is valued at £555 million (€654 million) and Henderson Park has plans to invest another £40 million in expanding the hotels and improving their facilities.

Raising capital, stateside
Huge volumes of capital continue to be raised for US real estate debt strategies. This week, our new affiliate title Real Estate Capital USA (read more about its launch below) reported on the closing of the largest US-focused real estate debt fund of 2021 so far. New York-based Torchlight Investors closed its Torchlight Debt Fund VII on $2.04 billion, outstripping the $1.5 billion target it had set [read REC USA’s coverage here]. The 10-year fund is targeting net IRRs of 10 percent to 12 percent. To do so, it is seeking opportunities to provide subordinated debt on transitional properties in America’s growth markets. In tandem, it is acquiring commercial mortgage-backed securities B-pieces. Torchlight is capitalising on growing investor demand for real estate debt within the US, and beyond.

What’s next for Evergrande?
Faced with mounting delinquencies on bond coupon payments – including a fresh $148 million loan added on Monday – China’s most indebted real estate developer is predictably looking to monetise holdings. China Evergrande Group is reportedly looking to sell a majority stake in its property management business to Guangzhou-based real estate firm Hopson Development [see coverage by Forbes here], as part of a broader restructuring and reorganisation plan. Chinese local media Cailian.com said Hopson will pay HK$40 billion (€4.4 billion) for a 51 percent stake in the developer’s property management unit. This represents a 28 percent discount to the unit’s current value of HK$55.4 billion. The potential transaction has shed some light on the future of the failing giant. A CBRE report also suggests Evergrande’s situation could play out like that of Chinese conglomerate HNA Group. HNA has been embroiled in a lengthy restructuring process over the past year involving state-owned enterprises.

The state of the UK lending market

Bayes reveals an H1 lending spike
The twice annual UK property lending report issued by London’s Bayes Business School – previously Cass – is a snapshot of who is lending, how much they are lending, and on what terms. The H1 2021 report, which was published this week, showed how the market was recovering from the shock of covid. In-depth analysis can be found here, and here are five key takeaways:

There was a lending rebound: H1 lending was up 50 percent year-on-year to £23.3 billion (€27.4 billion). Nicole Lux, senior research fellow at Bayes and the report’s lead author, attributed the spike to lenders addressing 2020’s deals backlog.

Distress was contained: A weighted average of 9.3 percent of total loan books was deemed ‘underperforming’. However, Lux said “hard defaults” were rare, and most issues related to covenant breaches which lenders were working out with borrowers.

Alternative lenders grow: Lux said debt fuds were particularly active, with 24 percent of new origination. “The real turnover is on the debt fund side of the market,” Lux told Real Estate Capital Europe. “They do short-term loans, and their balance sheet turns around every two years.”

Lenders are cautious: Perhaps unsurprisingly considering the market shock caused by covid, most lenders are writing loans with defensive terms. Across the £185 billion outstanding UK real estate loan pile, loan-to-values were, on average, below 56 percent.

A new name, and a new US title

Led by renowned real estate journalist Samantha Rowan, REC USA will provide analysis of the US commercial real estate debt markets that is not available elsewhere. The US market is growing rapidly, with substantial capital formation around lending and burgeoning interest from domestic and international investors. REC USA will analyse the organisations, the deals and the trends shaping this fast-evolving market. If you are interested in subscribing to REC USA, contact Martin Akachukwu at martin.a@peimedia.com.

German buyers return to London offices
German real estate investors have surged back into the City of London office market in 2021, buying £847 million (€997 million) of stock by mid-September, according to Savills. By contrast, the Bayes report showed German banks are cautious on the UK, with less than £1 billion of H1 2021 lending. At the top of the market, in 2015, they provided nearly £7 billion of debt in the full year. 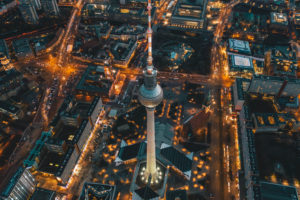 Retail restructuring
The €320 million refinancing of a German shopping centre portfolio by Hamburg Commercial Bank and Berlin-based alternative lender FAP shows some lenders are willing to back retail properties where they see a strong future. The two lenders restructured outstanding debt behind the so-called Christie portfolio, which consists of three major shopping centres in the Berlin region owned by New York private equity real estate firm Madison International Realty and Hamburg-based manager redos Group. Hamburg Commercial Bank provided a new senior loan and the FAP Balanced Real Estate Financing I Fund took over a circa €50 million unsecured loan in a club deal with a Swedish bank.

The portfolio originally included a fourth shopping centre in Dresden. Its sale last year prompted the portfolio refinancing, redos said. “With the liquidity freed from the successful completion of this refinancing, we are planning to invest in further raising the attractiveness of the locations for potential new tenants,” said Oliver Herrmann, chief executive at redos Group.