“If I were a borrower, right at this moment in time, I would want to get everything I have got on the table closed as quickly as humanly possible.”

Alexandra Lanni, chief investment officer and co-head, EMEA credit strategies, at CBRE Investment Management, says there is continued opportunity in the market despite the volatile economic backdrop, meaning a focus on sensible deal execution is essential. Lanni was speaking on our mid-market roundtable, published tomorrow at www.recapitalnews.com

No reprieve from debt cost increases
It is unlikely there will be good news for real estate borrowers at the next European Central Bank meeting on 8 September, according to a note published by Danske Bank this week. The Danish lender is expecting the ECB to issue a 75 basis-points rate hike, followed by a rise of 50 basis points in October and 25 basis points in December. The forecast was prompted by a speech by Isabel Schnabel, member of the executive board of the ECB at the Jackson Hole Economic Policy Symposium in the US. Schnabel argued for a forceful response to inflation, which hit 9.1 percent in the euro area in August – more than four times the bank’s target. “If a central bank underestimates the persistence of inflation – as most of us have done over the past one-and-a-half years – and if it is slow to adapt its policies as a result, the costs may be substantial,” said Schnabel.

Evergrande creditors lose patience
Global funds that invested in the indebted Chinese property developer, Evergrande, have taken matters into their own hands by proposing a debt restructuring plan, the Financial Times [pay wall] reported on Tuesday. The foreign creditors, which are being advised by law firm Kirkland & Ellis and investment bank Moellis & Co, have proposed that the chair, Hui Ka Yan, repay liabilities, which total $300 billion, with his own fortune.

Chinese residential property sales are expected to fall by one-third this year, according to S&P Global Ratings, as buyers lose faith in the market and pressures increase on developers to complete pre-sold apartments. The plan, which includes a proposal that Hui buys new share issues by Evergrande to repay part of its offshore debts, materialised after the company failed to meet a self-imposed deadline in July to explain how it would meet its liabilities.

The bidder pool narrows for Global Switch
After launching a search for a buyer in May, London-based data centre specialist Global Switch has now narrowed the field of potential suitors. The shortlist comprised a diverse mix of bidders, including multi-asset firms with dedicated platforms in both real estate and infrastructure, namely New York-based KKR and Stockholm, Sweden-based EQT, according to a report by Bloomberg. PAG and Gaw Capital Partners, two Hong Kong-based firms that have invested in data centres through their real estate businesses, as well as New York-based infrastructure firm Stonepeak Partners are also in the running. Not making the cut were Blackstone, Brookfield Asset Management and AustralianSuper.

Mixed fortunes
Europe’s worsening economic conditions are creating headwinds for real estate lenders. But not all debt providers are experiencing these turbulent times equally. Bank lenders have reported challenges in the loan syndication market, due to a widening in loan pricing, leaving some struggling to sell down. Senior lenders have also discussed the challenges reduced investment activity poses for financing dealflow. However, for some alternative lenders, particularly those with capital aimed towards the higher risk-and-return part of the market, the current dislocation represents an opportunity to grow market share.

Clark Coffee, head of commercial real estate debt at US manager AllianceBernstein, reported greater activity from alternative lenders, as banks retrench, making more quality deals available to non-banks. “Are we more selective? One hundred percent. But we’re still seeing more interesting opportunities, even with a tighter filter, than we did six months ago,” he said. Keep an eye out for coverage in our upcoming autumn issue, published 1 September.

Feeling negative
An emerging challenge for commercial real estate debt participants is negative leverage, the result of recent rates hikes and falling valuations. The phenomenon occurs when the yields on commercial real estate are lower than the interest rate on a loan. “When you borrowed money 90 days ago, you were able to get positive leverage – the rates on loans were lower than what the real estate was producing,” Edward Fernandez, president and CEO of Irvine, California-based 1031 Crowdfunding, told affiliate title Real Estate Capital USA this week. “That has [now] inverted and it is difficult to create current cashflow for investors.” Keep an eye out for a story on this trend in the next issue of Real Estate Capital USA, published on 1 October. 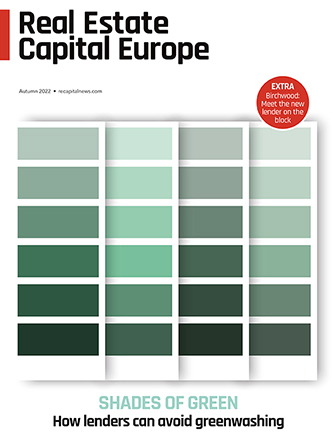 The greenwashing threat, and much more
The autumn print edition of Real Estate Capital Europe is published this week. Our cover story, written by deputy editor Lucy Scott, delves into the murky topic of greenwashing. Regulators are cracking down on claims of ‘greenness’ in the financial and asset management worlds. We explore the threat greenwashing poses to real estate lenders.

The edition is packed with content, including: an analysis of the challenges around hedging real estate debt in a rising rates environment; an interview with Lorna Brown and Kate Tovey as they launch Europe’s latest lending platform, Birchwood Real Estate Capital; our mid-market roundtable; as well as data, insight and much, much more. Keep an eye out on www.recapitalnews.com for autumn content.

Pbb backs Dutch logistics
So far in 2022, logistics has remained a hot segment of the European real estate market. Data from CBRE put H1 European investment at a record €31.2 billion. The property services firm also said average vacancy rates in the top 10 European markets dropped below 2.5 percent in that period. Some in the industry believe record low yields in the sector are unsustainable in a rising interest rate environment. But, for now, property investors and lenders see mileage in European logistics.

Among those deploying capital in the sector is German bank pbb Deutsche Pfandbriefbank. This week, it announced a €115.4 million credit facility to UK-headquartered manager abrdn’s European Balanced Property Fund SICAV-FIS, secured by a portfolio of six logistics assets located across the Netherlands, including two assets that will be added once completed. The bank said the 1.9 million-square-foot portfolio can be classed as “high institutional”, with annual rental income of around €10 million, and low vacancy.