“We are now a clear top-five opportunistic real estate manager when you aggregate our three regional funds.”

Craig Larson, head of investor relations at KKR, remarks during the firm’s Q2 2021 earnings call that the US private equity firm has bolstered its firepower with fresh capital from vehicles including its $2.1 billion Real Estate Partners Europe II fund [read more on affiliate PERE here (registration or sign in required)].

New York-headquartered BlackRock – a titan of the investment management world with $9 trillion of assets under management – is aiming to grow its exposure to the European commercial property lending market. The company’s real estate debt team, which is based in New York and London, has several years’ experience investing in property credit in Europe. However, as Real Estate Capital revealed this week, it now has a dedicated fund through which it will target high-yielding property loans, following the €609 million final close of its inaugural BlackRock European Real Estate Debt Fund [read the full story here].

The opportunity, according to Robert Karnes, BlackRock’s global head of real assets debt, is in junior loans, where the company is aiming to originate debt with an average of 75 percent loan-to-value across a range of property types. According to Karnes, there is plenty of finance in the senior lending space, but fewer lenders offering junior loans. “Increased regulation and tighter credit controls have led to intense competition for senior debt,” he explained. “By comparison, relatively little capital has been raised for high-yielding debt strategies.”

Capital Bay, the Berlin-based manager that launched in 2016, is also aiming to lend into less liquid parts of the European market. It is launching an open-end real estate credit fund, which has a target of €1.5 billion and is seeded by a circa €400 million portfolio of UK property loans originated by specialist lender EVH Finance. Through the whole loan fund, Capital Bay will provide investment and development loans and will target a 6-8 percent internal rate of return [see the full announcement here].

Rolf Engel, chief financial officer of Capital Bay Group and chief executive of Capital Bay Fund Management, said sponsors in need of development finance are increasingly turning to alternative lenders to finance their projects as traditional bank financing has declined during the pandemic because of market uncertainty and regulations such as Basel III.

The resilience of UK supermarkets during the pandemic, particularly when compared with other retail subsectors, is supporting lenders’ appetites for the sector. According to consultancy Savills, while the average prime UK retail yield rose from 4.43 percent in 2019 to 4.75 percent at the end of 2020, the average prime achievable yield for supermarkets compressed from 5.7 percent to 5.53 percent over 2020.

In the US, the latest indications point to fewer loans in delinquency in the commercial mortgage-backed securities market. Fitch Ratings reported that its US CMBS delinquency rate fell 22 basis points to 3.59 percent in July, which the rating agency attributed to more loan resolutions, fewer new delinquencies, and strong new issuance. Fitch pointed out that the resolution volume was strong – $1.7 billion in July, up from $1.6 billion in June – with hotels and retail accounting for most loan resolutions as cashflows improve.

Global transaction volumes were up 98 percent year-over-year last quarter, marking a significant bounce back from the lull of the pandemic. 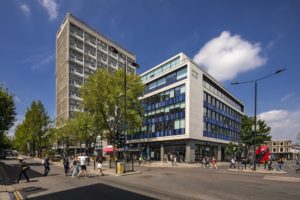 New finance for a London estate

UK asset manager Frogmore and its joint venture partner, the US banking group Morgan Stanley, have sourced a £177 million loan from Dutch bank ING to refinance their Notting Hill Gate Estate – a 3.1 acre freehold estate in West London containing around 197,000 square feet of space. Alongside senior finance from ING, which matures in 2023, a vehicle advised by Global Holdings provided junior debt on the transaction. The estate, which Frogmore and Morgan Stanley are in the process of redeveloping, contains four blocks comprising retail, redeveloped offices and a 274-bed hotel, which is currently under construction.