John Schoettler, vice-president of global real estate and facilities at Amazon, speaking to Reuters on why the e-commerce firm is halting construction on six new offices.

Allianz goes big on retail
German manager Allianz Real Estate counts itself among those keen to finance retail assets – assuming they are on the right side of what its head of European real estate finance, Roland Fuchs, calls a “transition” in the sector. Allianz this week announced [see coverage here] a €400 million loan to retail owner Unibail-Rodamco-Westfield and Canada Pension Plan Investment Board as part of a €700 million refinancing, alongside German bank Helaba, of Westfield Centro – one of Germany’s leading shopping centres.

In addition, Allianz in Q2 closed two other major European retail loans totalling €430 million. Fuchs argued retail with a strong future is increasingly apparent. “I would argue that the sector’s transition started earlier than other sectors, maybe even ahead of the cycle, as operators have been forced to rethink concepts and tenant mixes in order to adapt to changing consumer behaviour and future needs. This has been accelerated with covid,” he said, adding: “Across the retail sector we have seen bifurcation; strong centres getting stronger and weak centres getting weaker.”

Banks back Hibernia purchase
US banks Goldman Sachs and JPMorgan, plus French bank Société Générale, have agreed to finance North American manager Brookfield’s €1.1 billion acquisition of Hibernia REIT, the Dublin-focused office specialist, according to React News. The €930 million loan package follows Brookfield’s take-private deal, agreed in March. According to affiliate title PERE, the cash purchase represented more than a 35 percent premium to the closing price of Hibernia shares on 24 March, although the total acquisition cost was a 5.7 percent discount on the overall portfolio value as of the end of 2021. Hibernia is Brookfield’s third European office takeover this year, following the acquisition of German office REIT alstria in January and a public tender offer to buy Belgian office specialist Befimmo in February.

According to React, the loan facility also covers existing debt carried forward by Hibernia. The company had a revolving credit facility in situ with Bank of Ireland. Brookfield’s total investment is around €1.35 billion, implying a loan-to-value ratio of 70 percent.

Ready to finance European property
Europe’s real estate loans market continues to attract capital from across the Atlantic. This week, New York-headquartered mortgage REIT Ready Capital announced it has formed a joint venture with the London-based alternative lender Starz Real Estate through which the intention is to originate €300 million of real estate loans over the next two years [read coverage here]. Loans will be up to 75 percent loan-to-value and in the order of €10 million to €40 million. Ready Capital chief executive Thomas Capasse framed the agreement in the context of Ready’s plans to expand its reach internationally.

In February, speaking after Starz secured a €900 million mandate to lend on behalf of a Middle Eastern sovereign wealth fund, Starz chief executive David Arzi said the smaller scale of Europe’s real estate lending industry, compared with the US, is a source of opportunity for investors. “I think Europe still has some levels of inefficiencies, which enables you to get some extra yield that is probably hard to find in the US market.”

Aareal highlights the need for green
Office buildings’ ESG credentials appear to be increasingly important to lenders. Germany’s Aareal Bank this week announced a €200 million green loan to French private equity firm RedTree Capital for the acquisition and refurbishment of the Carré Champerret complex of four office buildings in Levallois-Perret, near Paris. RedTree chairman Eric Sasson, said the firm is focused on improving the operational performance of assets, including energy consumption. “To achieve this goal, we will invest in smart building and building operating systems,” he said.

Aareal board member Christof Winkelmann discussed the deal in terms of constrained supply for large, modern office space in Paris, but emphasised the need for sustainable assets. “Office space complying with the highest ESG market standards and with strong property fundamentals will remain a sought-after product,” he said.

Catching a flick
Lenders have taken control of UK cinema chain Vue International as part of a £1 billion (€1.2 billion) restructuring involving a debt-for-equity swap which will see its current owners, Canadian pension funds OMERS and AIMCO, exit the company, according to an article published last week by the Financial Times, which can be viewed here. The FT said the lender group is led by US manager Barings and hedge fund Farallon Capital, and includes managers Invesco, PGIM and Lord Abbett. The restructuring demonstrates the continued fallout of the covid pandemic on the leisure industry.

Losing appetite
Lenders’ appetites for risk are likely to be smaller in the second half of 2022, with an impact on the availability of real estate debt, according to digital financing platform Finloop. In a new research report [read more about it here], the firm said lending costs for value-add properties and developments are particularly likely to increase further due to fewer lenders being willing to provide finance. It reported a decline in lender appetite during Q2 across seven European markets, particularly for hotels and student housing in Germany and the UK. Offices and residential were attracting the most lender attention, it added. “Lenders have become very cautious about providing new loans, and their response time has also increased significantly when considering new financings,” the company said. “Many acquisitions are still trading at high income multiples or low yields, pushing debt affordability to minimum levels.”

A surprise record
In the wake of Russia’s invasion of Ukraine in February, sentiment soured on investing in Europe, per a number of conversations affiliate title PERE had with managers at the time. However, global real estate adviser CBRE has found that total investment volumes in the region reached €152 billion in the first half of 2022, the strongest first half of the year ever in the region. While some of that was driven by a strong first quarter, many countries, including Ireland, Belgium, Italy, the Netherlands, Spain and France, all saw year-on-year increases north of 20 percent and in some cases much higher during the second quarter. Belgium and Ireland posted record investment volumes for Q2 2022.

CMBS standard
A Fitch Ratings report published this week [access it here] cited positive attributes of the US commercial mortgage-backed securities conduit market, comparing the standardisation of structures seen stateside to a more novel approach to loan structure and collateral types in the EMEA region. “Fierce competition from banks in the EMEA commercial mortgage loan market means pre-payable floating rate loans dominate, unlike in the US market, which handles significant volumes of prepayment-protected 10-year fixed rate lending. Consequently, there is no EMEA equivalent of the US conduit CMBS market, which is multi-borrower, fixed-rate and fully sequential,” the report stated. Watch this space for more analysis from affiliate title Real Estate Capital USA – the conventional wisdom is that the US CMBS market has helped to keep discipline in the lending markets.

Funds of funds bounce back
Funds of funds, an often-overlooked part of the private real estate industry, have posted aggregate returns of 12.4 percent for 2021, the highest in the past 15 years, per a report from industry bodies INREV and ANREV. The returns rebounded sharply from the 1.7 percent returns in 2020, the worst performance for the market segment since 2013. 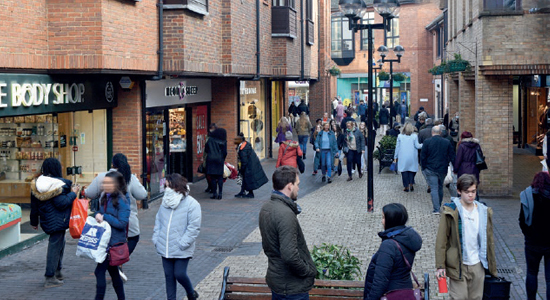 Schroders’ UK retail loan
More examples of lenders financing retail property in the UK are emerging as they take a fresh look at a sector that has faced major challenges. This week, London-based manager Schroders Capital announced it has refinanced a purpose-built retail centre in the Hertfordshire city of St Albans with a £33 million, three-year senior loan. The borrower, the London-based investor and developer Boultbee LDN Investment, received an ESG-related capex facility as part of the financing for The Maltings shopping centre. Simon Hosking, managing director at Boultbee LDN, said the centre has 99 percent occupancy. The capital came from Schroders’ UK Senior Loan fund, which targets a gross return of 6.5 percent by directly originating loans between £15 million and £100 million in the UK mid-market across all real estate sectors.