“Personal and particularly also spontaneous meetings could finally be held again at this year’s EXPO Real. We saw that personal discussions, despite the mask, cannot be replaced by anything else.”

Filling the gaps
Alantra, the Madrid-based investment bank and alternative asset manager, has raised €132 million for its first property debt strategy to target what it sees as gaps in the real estate financing market, mainly in its home country. Jaime Cano, partner in Alantra’s private debt unit, told Real Estate Capital Europe the firm aims to deploy around 60 percent of its Alteralia Real Estate Debt FIL fund in small to medium-sized loans in Spain, with the remainder targeted towards other eurozone countries. By providing facilities from €5 million to €20 million, the firm is focusing on a size range Cano argued is underserved by lenders. “In this market segment, there is not fierce competition in Spain,” he said.

The state of the Spanish real estate finance market will be debated in Real Estate Capital Europe’s Spanish roundtable, which will appear in our winter print issue and on recapitalnews.com in early December.

Arcida anticipates a growing market for NPLs and SPLs in the region, driven by factors including tighter bank regulation, new accounting standards and the impact of covid. Managing partner Oliver Platt said: “International investors have not yet fully recognised the market potential in Germany, Austria and Switzerland. We also act as a partner to banks and other financial service providers as they seek to wind down their distressed loan portfolios.”

Mezzanine slice
According to Berlin-based advisory firm FAP Group, Germany’s lending market is generating opportunities for mezzanine lenders to write sizeable loans as the country’s banks play it careful on leverage. FAP’s seventh annual Mezzanine Report [read our full coverage here] highlighted a market “sweet spot” for subordinated loans of between €10 million and €35 million, up from a €5 million to €30 million range last year. However, that does not mean such deals are in abundance. FAP said the pandemic has impacted dealflow, so while mezzanine tickets are bigger, there are fewer of them overall. There are also plenty of lenders vying for them – FAP reported 155 active subordinated finance providers in Germany.

A home for equity
Savills’ European Investment report, published last week, identified living sectors, logistics and supermarkets as the top real estate equity investment trends [find the full report here]. The consultant said this year’s investment volumes are likely to exceed 2020’s by at least 15 percent, to reach around €270 billion. Investment into income-producing ‘living’ sectors will remain at unprecedented levels, on the back of rising demand for rental property, Savills said. A busy year of large portfolio deals means the living and care sectors are expected to account for almost a third of all European investment, with logistics taking a 20 percent share. With many lenders wary of offices and retail, expect to see them attempt to deploy sizeable volumes of capital in Europe’s residential sectors.

Not content with setting hard recruiting targets, private real estate manager BentallGreenOak is moving on to setting clarity around its gender parity aims. The New York-based manager announced last week it was committing to achieving gender parity by 2030. How will the firm do it? Working with the coalition Paradigm for Parity, its measures include:

1. Eliminating or minimising unconscious bias in the workplace.

2. Significantly increasing the number of women in senior operating roles, with the near-term goal of at least 30 percent representation in all leadership groups.

4. Basing career progress on business results and performance, rather than physical presence in the office.

The announcement builds on the firm’s hard-line recruitment target, set last year, which dictated two-thirds of all new hires at the $69 billion assets under management manager be women or from under-represented communities. You can read affiliate title PERE’s coverage of that measure here.

Expanding universe
The universe of real estate debt vehicles tracked by the European Association for Investors in Non-Listed Real Estate Vehicles, known as INREV, has doubled in terms of targeted equity between 2016 and 2021. 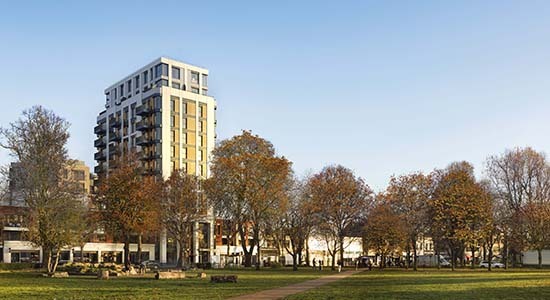 An office transformation
The repurposing of dated office buildings to give them a new lease of life with another use is a significant real estate theme to come out of the pandemic. Great Marlborough Estates, the London-based developer, has such a plan for Empire House, a vacant office block on Chiswick High Road in the west of the UK capital. The asset’s future, the developer believes, is as 137 apartments and townhouses [read more here].

Last week, it announced it has secured a £76 million (€90 million) loan to finance the asset’s redevelopment. The three-year whole loan was arranged and originated by Précis Capital, a residential development financing platform [read our piece on the company here], with funding provided by US private equity firms Carlyle and Apollo Global Management. Grant Lipton, co-founder of Great Marlborough Estates, said the funding will “allow is to transform what has been a long dormant office block into a vibrant new community and local landmark”.