There was relatively little movement at the top of the Real Estate Capital Debt Fund 30 when compared with the 2020 edition. However, the notable stories from the ranking included AXA IM – Alts extending its lead and AllianceBernstein entering the market with a significant sum of capital. Here are four key stories.

AXA IM – Alts, the investment arm of insurer AXA, is a huge but understated European property lender. Much of its activity involves participating in syndicated senior loans through its range of credit funds and separate account mandates. It now has almost $7 billion of daylight between its five-year fundraising total and that of second place ICG Real Estate – a significant extension on its $3.7 billion lead in 2020. AXA was the first major non-bank institution to enter the European real estate debt market in 2005, which helps explain its influence in the sector.

M&G breaks into the top five

The only change to the top five saw M&G Investments rise from seventh to displace BentallGreenOak in third place. M&G continued to raise capital in 2020 and held a £1.6 billion (€1.7 billion) close across three funds in June. It benefitted, in part, from the inclusion in the 2020 ranking of capital allocated to Europe within multi-regional funds – between 2015 and 2019, it raised more than $2 billion for its Real Estate Debt Finance series in vehicles mainly targeted towards Europe, but which also included a US allocation.

In September 2020, Stockholm-based Brunswick Real Estate announced the launch of its third senior debt fund, with SKr12 billion (€1.2 billion) in secured commitments from investors, including some of the largest Nordic institutions. The fundraise helped boost Brunswick’s standing in the ranking, from 15th in 2020 to eighth this year. Brunswick’s strategy is focused on its home market, in which it provides loans of up to 10 years.

Entering in 16th place, $631 billion US manager AllianceBernstein is a prime example of a major real estate equity manager turning its gaze towards European real estate debt. In November 2020, it bought a strategic stake in Lacarne Capital, a lending business launched in January of that year by Clark Coffee, previously head of real estate for lender Tyndaris, now known as Tyrus Capital. With Coffee at the helm, and branded as AllianceBernstein European Commercial Real Estate Debt, it is a significant newcomer. 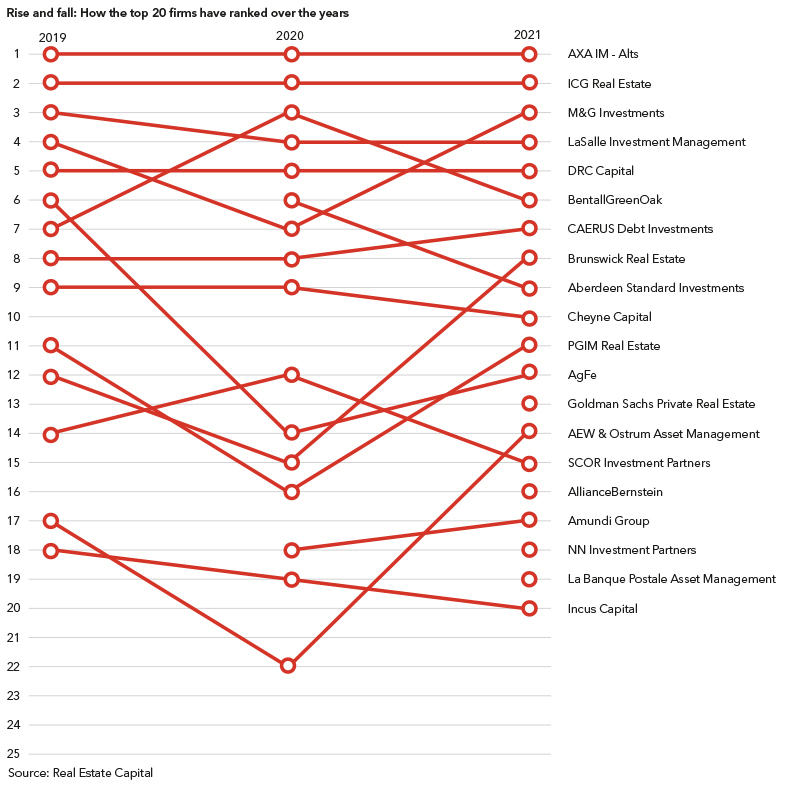