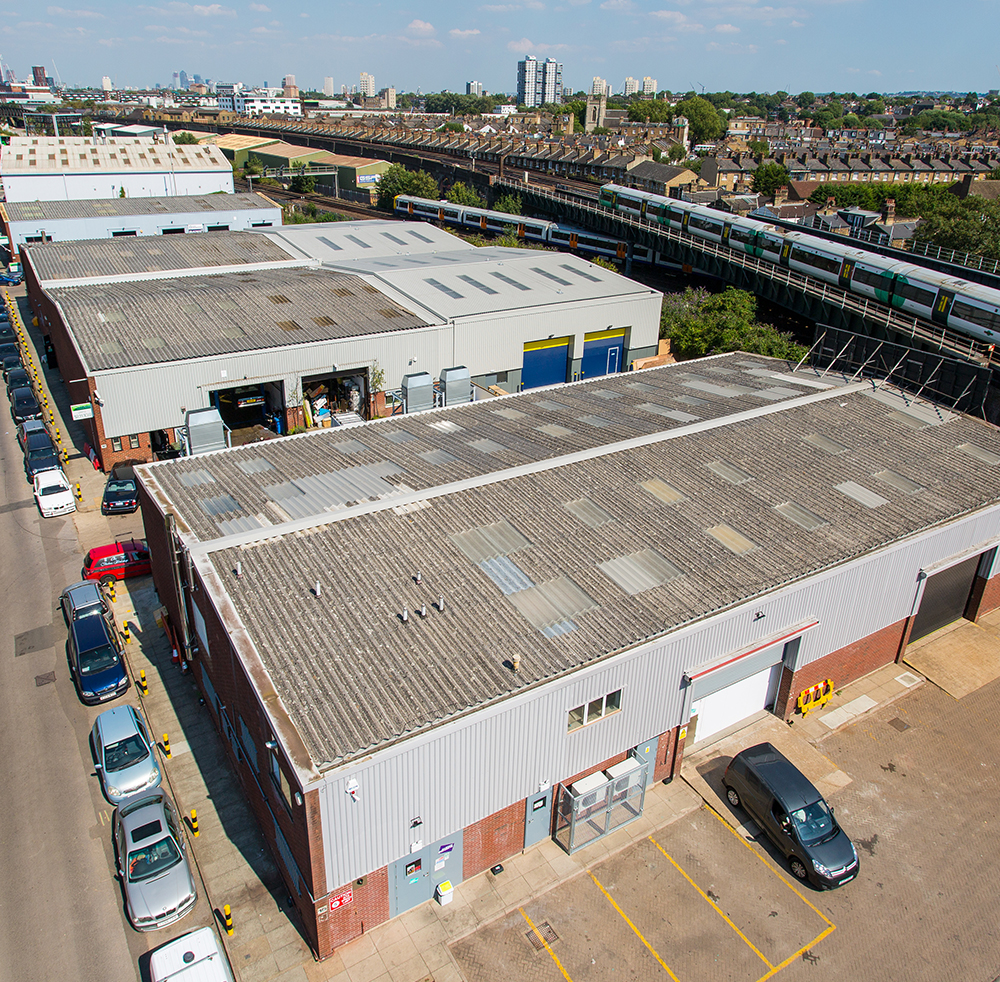 “The opportunity was the appeal.” For Emmanuel Van der Stichele, the chance to lead Blackstone’s latest conviction bet in real estate was too good to turn down. “It doesn’t often happen that you get such a chance.”

Van der Stichele is in Blackstone’s London office participating in his first interview with our sister title PERE as chief executive officer of Mileway, a business launched in September by the private real estate giant. It is, essentially, a company wrapped around more than 1,000 urban logistics properties that Blackstone has been aggregating since 2017. Together, they carry a value of more than €8 billion.

The assets are defined today as ‘last-mile logistics’, the business widely regarded to be the first of its kind dedicated to this type of industrial property anywhere in the world. The bet has been made with equity from the Blackstone Real Estate Partners Europe fund series, the higher risk and return characteristics of which are in line with its rapid growth aspirations for the new venture.

Being responsible for such a concerted – and sizable – outlay by the world’s biggest landlord, and for a fund series with consistently high performance, carries a weight of expectation. Furthermore, these funds are closed-ended, which means the investment is on a timer. Add the fact there is significant broader interest from investors and manager peers alike to see whether a dedicated platform strategy in this as-yet largely unsophisticated segment of the asset class can be institutionalised, and the pressure to succeed is not just high, but under the spotlight too.

“Of course, there’s pressure for me to perform,” responds Van der Stichele. “But whatever you choose to do, you always want to perform.”

From a 20-year-plus career becoming increasingly senior at established powerhouses, including banks Credit Suisse and JPMorgan, and latterly at logistics manager Goodman, Van der Stichele feels ready to step up to steer a business with no track record, in a sector with limited institutional history. While Mileway starts life as the biggest pure-play, last-mile logistics business around, it is also a start-up.

Indeed, while Mileway 1.0 has almost 100 million square feet of property in close proximity to more than 100 cities across Europe to manage, and more than 7,000 customers to service, it has no legacy infrastructure to contend with. Effectively, Van der Stichele has inherited a blank canvas on which to demonstrate how a last-mile logistics business should be run. “That’s a tremendous benefit,” he says. “It has been really helpful in attracting talented people, too. I have an opportunity here to build a team from scratch.”

And team-build he has. Last month, Panayot Vasilev joined as chief financial officer from parent Blackstone where he also held a CFO position. He adds to a C-suite also comprising Dominiek Van Oost, chief operating officer and a fellow Goodman alumnus, and Thomas Ten Bokum, formerly European operations lead at logistics giant Prologis. They are part of a 150-strong bench charged with establishing and growing a business ripe for an institutional exit in a short timeframe.

Assessing when and how that exit ultimately occurs is Adam Shah, Blackstone’s COO of Europe real estate asset management. Shah, sitting beside Van der Stichele, echoes the benefits of operating in first-word territory. “We don’t have any legacy issues that a similar business might have that has grown through M&A, with the competing systems that brings. There’s no need to be spending lots of time at central office trying to translate and aggregate all that data.”

Shah says Mileway is already benefiting from having one financial system, developed by Blackstone as it was aggregating the asset base over the last 18 months. “We require all our vendors and third-party service providers to plug into that system,” he says. “That’s part of what will make Mileway an attractive investment opportunity, the fact it is self-contained.”

This uniformity of infrastructure at Mileway is going to be important when meeting the challenge of herding so many assets in what is broadly regarded to be a fragmented marketplace, and managing so many relationships over short lease terms. Last-mile space often lets for between three and five years, versus five to 10 for big box properties.

“There’s an intensity in the management given the granularity of having tenants which are smaller and, in certain cases, not quite as sophisticated. It is a very different discussion to be had with a tenant wanting one million square feet, compared to a tenant wanting 100,000 square feet. Often, they are represented by different professionals and have a different leasing process. This is much more relationship-driven.”

Van der Stichele thinks the singular infrastructure offered by Mileway will also be of benefit to its tenants. In keeping with private real estate’s broader theme of real estate as a service as well as an asset, he expects the business’s occupiers to enjoy the economies of scale it achieves. “Not just being able to have the resources to better maintain your properties, but also being able to source more qualitative and cost-effective services from suppliers as well as having better systems to focus more on your customers will be welcomed. We have a clear opportunity to do a more professional job here.”

Such a service is hoped to enhance Mileway’s strategy to improve its portfolio’s performance and so, in turn, drive the bottom line. To that end, the business has acquired assets with notable vacancy. It is also expected to assist its strategy of driving rents among an occupier base which is often rent-insensitive. Indeed, according to a report by Munich-based manager DWS, rent typically accounts for just 4 percent of logistics costs for many e-retailers, which are the types of tenant Mileway seeks to accommodate.

When PERE interviewed James Seppala, Blackstone’s head of real estate in Europe, after Blackstone announced the launch of Mileway, he described scenarios in which properties could be offering a 3-5 percent going-in yield only for increases in occupancy and tenancy changes to precipitate yields reverting to market levels hundreds of basis points higher. These higher prices can be further intensified in areas of scarce supply owing to their infill locations and where competing use demands, such as local services and even light manufacturing, can see occupiers often able to pay more for their space.

“Of course, I look at it from the long-term perspective because Mileway will be a long-term owner”

In the UK, for instance, where Blackstone is in the throes of privatising logistics business Hansteen in a £500 million (€583 million) deal – which neither Van der Stichele nor Shah can discuss – rents for infill urban locations can vary widely from around £6 a foot in places like Norwich to up to about £20 per square foot in the highly competitive London markets such as Brent, according DWS’s report. “If you look on the supply side, there are places where we operate where supply even decreases because of urbanisation pressures,” Van der Stichele remarks. “That’s another interesting aspect of last-mile logistics where there is also an alternative use over time.”

Mileway will buy individual properties, Shah confirming many assets have been acquired at low single million-dollar valuations. But it is the Hansteen-like big portfolio purchases that have really fast-tracked the critical mass necessary to establish the business. The biggest of these was Hansteen’s German and Dutch assets, alongside London-based manager M7, in a deal valued at €1.2 billion in 2017. Purchases from Starwood Capital, HIG Capital and Oaktree have also contributed to Mileway’s day-one portfolio. While rival managers aspire to acquire last-mile properties given their notably higher valuations nowadays, few have the firepower to do so at such a pace and at such size.

Whether Blackstone sees copycats will be one litmus test of the thesis. Mike Bryant, co-head of private real estate at Zug-headquartered manager Partners Group, sees strong occupier demand. He sees equity buyers switching tack from retail investments to logistics too. But he questions whether the real economy will continue to support the surge in pricing. “Will GDP growth really support rental growth assumptions underpinning some of the prices people are paying? We have a tendency toward last-mile. But we’ve seen some of the pricing as quite full and I don’t think we have the conviction to underwrite the rental growth that maybe others are seeing.”

“We, and many others do believe in last-mile logistics as an important and growing sub-market. But it is different to pursue an aggregating strategy in it” comments Edmund Craston, head of fund management at rival manager Patrizia. “We do feel it’s an important part of a logistics strategy. The question I have is how easy it is to create a standalone strategy and a platform with an exit in mind.”

Bill Benjamin, head of real estate for manager Ares Management, says: “Last-mile is an essential part of the logistics chain that moves goods to businesses and homes in growing urban areas and is part of an expanding asset class.” Benjamin says last-mile logistics is one of Ares’ current investing strategies too, placing it also among the movers in this nascent territory: “There is plenty to assembling a critical mass of assets which attracts tenants, to build professional management teams and to centralise functions to maximise the value of the assets.”

Blackstone has backed its own view on whether a standalone last-mile logistics business makes sense with action. For his part, Van der Stichele has accepted the challenge of turning a “blank sheet of paper” into a “best-in-class company.” For him, job one is handling the pressure of answering to a private real estate giant and serving the world’s most popular fund series. Do that job well, and job two could be running a business in institutional shape. “Of course, I look at it from the long-term perspective because Mileway will be a long-term owner.”

But, little more than three months into the job, Van der Stichele is thinking mostly of the first task at hand. “Setting up an institutional business is the main target,” he states. “There will be an exit at some point, and we want to be sure we have a business that is ready.”