Real Estate Capital Europe
Home News & Analysis Sentiment among lenders is down, but not out – CBRE
Return to search
News & Analysis

Each quarter since March 2019, CBRE and Real Estate Capital have published analysis of data based on the CBRE Debt Map. This explores how and why debt pricing has moved in the preceding quarter and where there is value in the market for lenders and borrowers alike. As with so much in the last few weeks, the old way of doing things is no longer possible or relevant, and we have had to adapt our Debt Map.

Since the end of March, we have observed from our conversations with more than 80 lenders that the debt market has, in effect, been on pause. Deals begun before the crisis have in many cases – though not all – been completing. However, there has been precious little activity when it comes to new deals begun during lockdown. In this environment, it would be misleading to state pricing data for European debt markets. What we have done, however, is track a new set of metrics to throw some light on the factors weighing on lender sentiment – and how these may be easing over time. 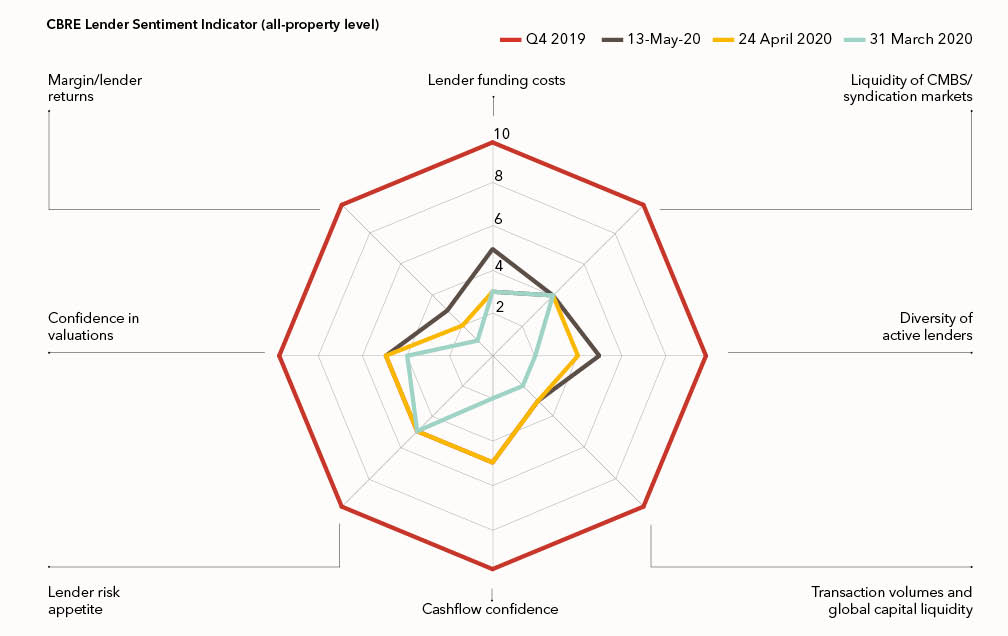 Our debt advisory team of 35 across Europe is in regular communication with lenders. Centralising all the information has enabled the team to build a comprehensive picture of lender sentiment, complemented by data derived from our network of valuers, agents and property managers.

We are tracking eight indicators of lender sentiment. Some of those are external forces: drivers of or volatility in funding costs; liquidity in commercial mortgage-backed securities and syndication markets; the presence of other lenders; and wider market transactional activity and evidence.

Other indicators will be specific to individual lenders’ views and judgements, and are likely to be contingent on their existing loan books. These include perceptions of future sustainable cashflow; risk appetite around loan structure and covenants; confidence in external valuations; and accurately pricing debt to deliver an appropriate risk-adjusted return.

For each indicator, we have given a score from one to 10, based on our knowledge of lender sentiment. For comparison purposes, 10 represents conditions in Q4 2019 – an imperfect but reasonably smooth and functioning market, which we use as a control environment against which to benchmark sentiment.

When the indicators are plotted as a radar chart, the larger the shape, the more confident lenders are about the real estate debt market environment, and the more active and liquid the market should be.

Since March, we have observed improvement in most indicators, but they all remain some way from their Q4 2019 base. On the downside, low transaction volumes remain a barrier, as does the margin/lender returns indicator. The latter does not so much reflect lenders not knowing what they might charge for debt, although there is less certainty about that; it is more a reflection that with the withdrawal of some types of lender from the market, margins may be higher than they were prior to the crisis because those remaining lenders have higher costs of capital that need to be passed on to borrowers.

On the upside, we have seen a notable improvement in some indicators. There is greater certainty around lender funding costs – volatility has reduced in the spreads for Pfandbriefs, credit default swaps and corporate bonds. Although levels have settled higher than previously, at least they are stable. A greater number and variety of lenders are making moves to return to new business activity, rather than purely focusing inwardly on portfolio and risk management. With end-quarter reporting of rent collection data, lender sentiment has improved with regard to predicting short- and medium-term cashflows. Sentiment surrounding valuations is also improving, as uncertainty clauses are beginning to be removed in some parts of the market, such as on long-income assets and supermarkets in the UK. 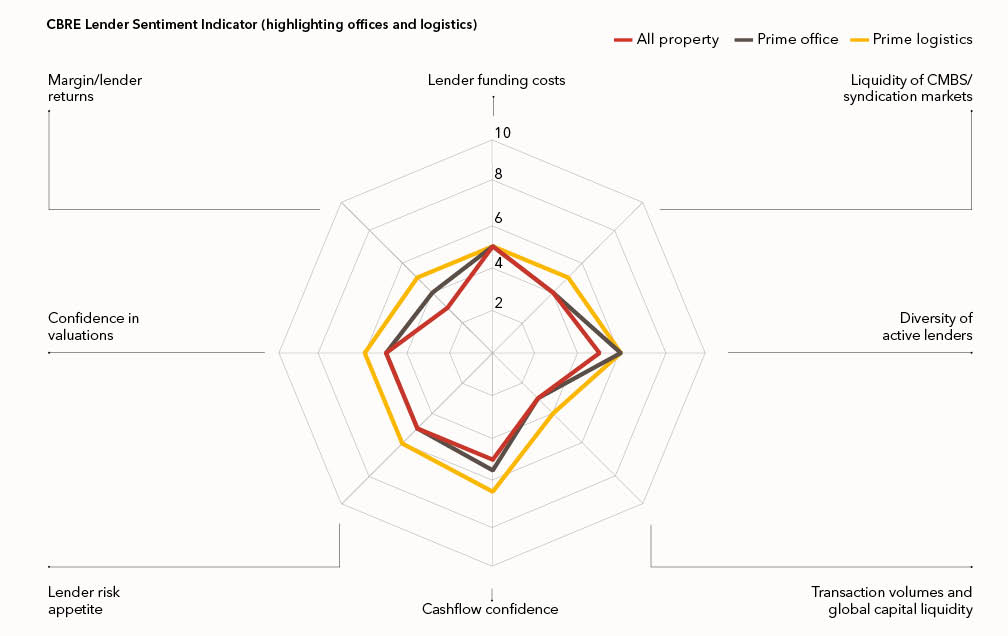 These data then, provide insight into the recent evolution of lender sentiment in the overall real estate finance market. However, it is possible to break this down to sectors of the market, as we have done with prime offices and prime logistics. Available valuation data show these sectors have been the most resilient so far. A whole debate may be had about future demand for office space: will it be higher due to greater social distancing or lower due to more homeworking? But confidence is generally high in the continued demand for logistics space as retail activity shifts online.

Greater resilience at the property level in the office and industrial sectors has fed through to improved lender sentiment, as shown by the progressively larger webs moving from all-property, to offices and then to logistics. Prime offices score more positively than the market average on three indicators: diversity of the lender pool, confidence in cashflows and margins/lender returns.

We believe more lenders are willing to commit to offices because they have greater certainty in future rental payments underpinning loans, which in turn underpins faith in pricing. The prime logistics market is even further advanced, however, with lender sentiment stronger on just about every indicator. This reflects the fact that the decrease in, or volatility around, underlying cashflows, transactional activity and valuations has been less severe in logistics, which in turn feeds through to supporting confidence in other areas.

This analysis is, by necessity, not as scientific as the Debt Map. However, it is an attempt to bring some clarity to key factors in the decision-making process for those underwriting assessments. It is a useful guide for the times, capable of starting informed debate and critique, and perhaps enlightening borrowers to lenders’ collective challenges. With that enlightenment may come a greater focus on assuaging those concerns, which could allow considerate borrowers to gain an advantage in securing debt in these extreme market conditions. Agile lenders should challenge themselves to pick through the media narrative to make well-balanced decisions and find the right opportunities for the right sponsors on the most resilient assets.