Countries with higher than average debt-to-GDP ratios as governments deal with covid-19-related indebtedness in the coming decade could be subject to higher real estate risk premia, creating tactical investment opportunities.

This was among the conclusions reached by CBRE’s research team as the consultancy considered the likely course of government responses to spiralling debt due to the pandemic.

IMF estimates show the aggregate figure for euro-area government debt, as a proportion of GDP, will approach 100 percent by the end of 2020. France, Italy and Spain will see higher levels than Germany and the Netherlands, with the UK likely to be at, or around, the 100 percent mark. “With the EU Stability and Growth Pact threshold at 60 percent, this matters,” CBRE said in the report.

The consultancy added the expectation is that debt-to-GDP ratios will come down over the next decade, as growth exceeds the cost of servicing debt. Governments will aim to keep the cost of debt down through additional quantitative easing, supplemented with ‘lite’ austerity and tax increases, feeding into low interest rates.

CBRE said such tactics are more likely than governments deliberately stoking inflation to erode the nominal value of debt, or seeking to default or renegotiate debt.

However, CBRE’s projections showed even small changes in assumptions have significant consequences. The consultant made small adjustments to forecasts – higher interest rates and reduced GDP growth – which resulted in many country’s debt-to-GDP ratios rising by 2025, rather than falling.

“Given the risks to the central, consensus plan therefore, it is worth considering alternative paths for government finances and the economy in general, and how real estate would fare under such circumstances,” the report said. 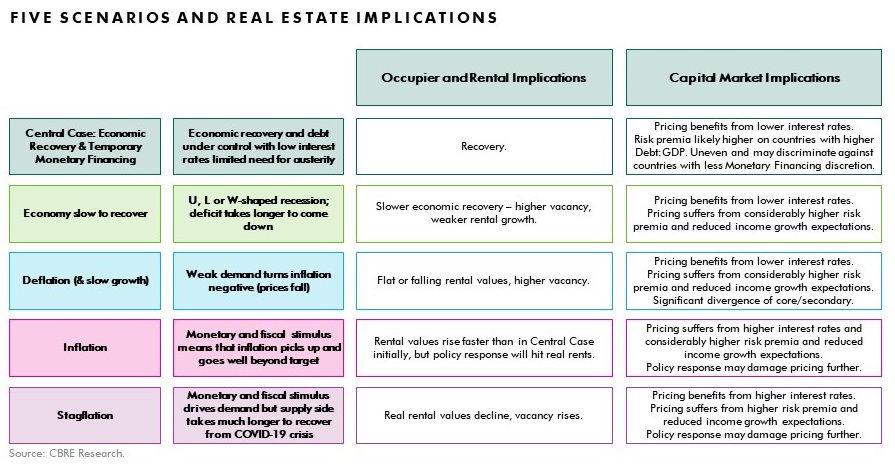 CBRE considered four alternatives to the ‘central case’ of a gradual reduction in debt through a recovery supported by monetary financing: slow economic recovery; deflation; inflation; and stagflation. The consultancy drew conclusions for real estate investors, including:

CBRE said how, and how successfully, governments balance investing for growth and reducing debt burdens, while potentially facing the need to expand support if there are other virus outbreaks, will be a key influence on the performance of real estate markets.

“Thus far, governments seem alive to the challenge and the need to co-ordinate their action,” CBRE said, pointing to the Next Generation EU recovery plan.

“While some of its monitoring mechanisms may hint at division beneath the surface between groups of states with differing fiscal outlooks, for the moment there seems to be sufficient collective resolve for investors to have confidence that a central case outcome supportive of strong real estate performance will prevail.”