In the final quarter of 2019, there were only very slight changes in headline real estate debt pricing in Europe. Data from real estate consultancy CBRE show that, for senior loans to prime offices, the only notable shift among major markets was in the UK, where loan-to-value ratios fell, from 60 percent to 55 percent, while margins held steady at 1.7 percent.

With swap rates on the rise – from 0.6 percent to 0.88 percent – the total cost of debt increased from 2.44 percent to 2.72 percent. UK real estate debt is therefore among the most expensive in Europe. However, in historical terms, it remains extremely cheap.

Swap rates outside the UK also increased – in the case of EURIBOR from -0.41 percent to -0.13 percent. But given the zero percent floor present in most real estate lending deals, this will have had little if any noticeable impact on borrowers. Therefore, the average cost of debt for the markets covered by CBRE’s European Debt Map is now 1.84 percent, from 1.77 percent in Q3 2019 and 2.14 percent in Q4 2018. 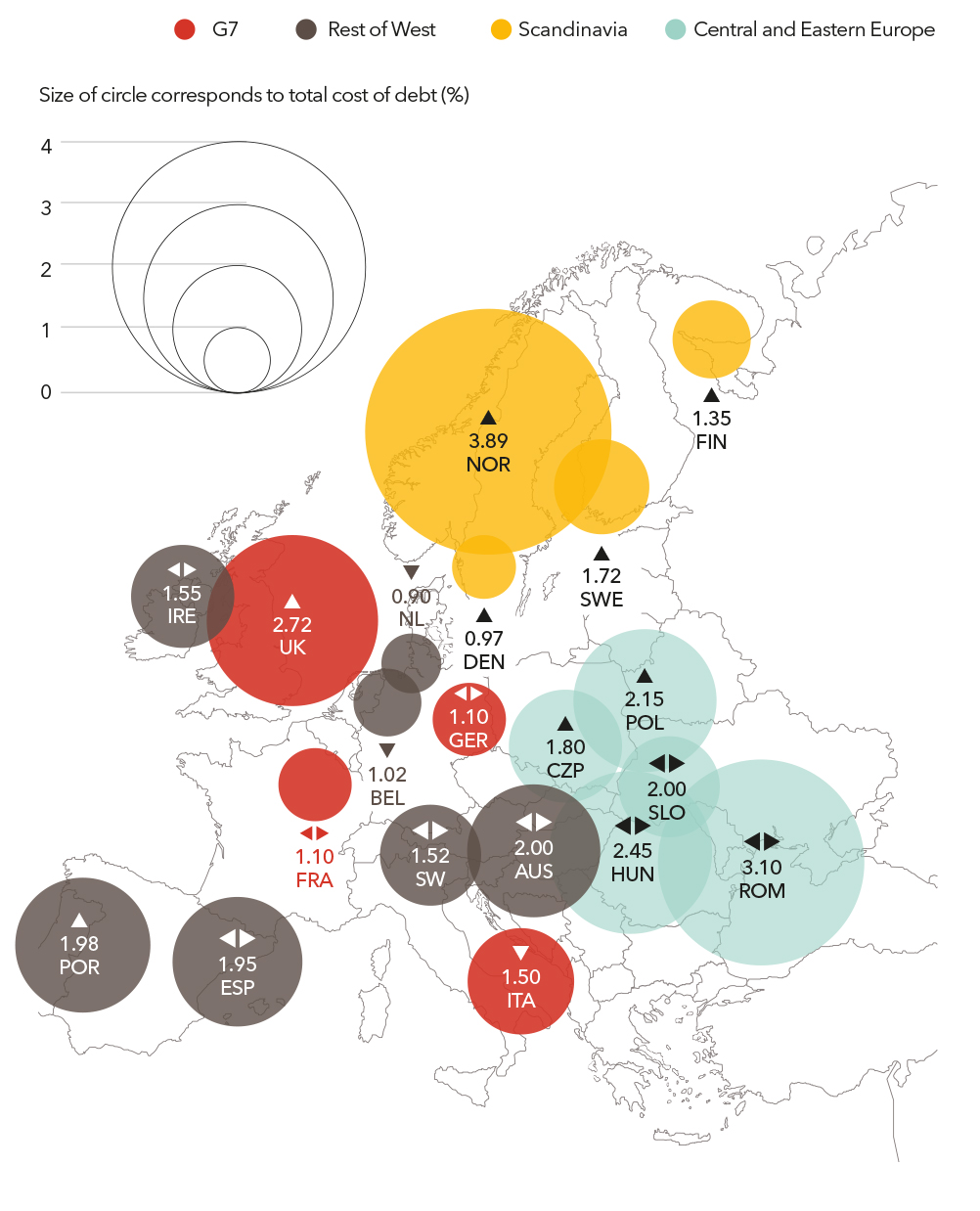 Seven markets – Amsterdam, Brussels, Copenhagen, Frankfurt, Helsinki, Paris and Rome – now have a total cost of debt for senior office loans against prime property at or below 1.5 percent.

Only three markets have a total cost of debt of more than 2.5 percent – Bucharest, Oslo and London. The latter two markets having higher non-euro denominated interest rates.

Although there was little movement in loan terms in the final quarter of the year, over 2019 as a whole, fortunes varied across the three mainstream sectors of the European market – office, industrial and retail – with lending terms being bid more aggressively for offices than for retail.

Taken together, this shows that lenders were collectively more cautious about reducing the cost of borrowing against prime retail investment than against prime office and industrial lending.

Average retail margins increased by a basis point to 1.86 percent, compared with a 13bps fall in office margins to 1.57 percent and a 5bps fall in industrial margins to 1.78 percent. The decline in the total cost of debt for retail – 16bps to 2.14 percent – was therefore approximately half that seen in the office and industrial markets, where they fell 30bps and 123bps, respectively, to 1.84 percent and 2.05 percent.

In this regard, movement in the pricing of debt during 2019 reflected that of the pricing of the underlying real estate. Five out of the 20 retail markets covered by the Debt Map saw yields rise in 2019, compared with just one office market and no industrial markets. Only seven retail markets saw yields fall – versus 16 office markets and 14 industrial markets.

There are opportunities in retail lending

Investors and lenders alike are looking closely at retail – either through existing positions, or when and where the sector generates new opportunities, with appropriate risk and reward given the ongoing uncertainty and volatility.

Lenders looking to underwrite new loans or considering refinancing proposals remain focused on the core financial fundamentals of the asset’s rental sustainability. After a turbulent 18 months for retail, this is not an easy analysis. Key to decision-making is the proficiency of management teams and if they are astute and agile enough to adapt and respond to the changing demands of consumers and occupiers.

The shift towards e-commerce is clear, but a bricks – as well as clicks – presence will surely persist in a meaningful way. Retail outlets and convenience stores remain attractive to investors. Consequently, some lenders are starting to make positive strategic decisions and have realised good deals are there, with more attractive margins than in other sectors.

Those that make the decision to pursue risk-adjusted returns will serve the market well. With lenders generally more cautious on retail, those prepared to take more risk could reap the rewards.

On more attractive risk-adjusted margins, our debt market commentary shows hotels and operational assets are providing an additional opportunity to maximise returns where competition is slightly lower. Increasingly, we are seeing investors building relationships with operating parties to effectively manage investment risk. This brings ‘brains and bricks’ together, thereby reducing some operational concerns for lenders too.