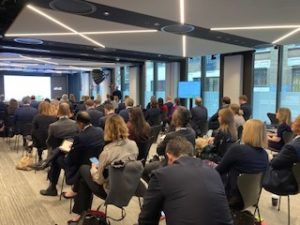 Pension funds and other institutional investors are increasingly making real estate debt a core part of a private credit allocation, according to panellists at the Commercial Real Estate Finance Council Europe’s Autumn Conference held in London this month.

“Pension funds and insurance companies are desperate for yield,” Radkiewicz said. “They’re [now] looking outside the public markets to the private fixed-income territory for different levels of risk and return.”

“The market started with high-yielding lending opportunities because that was where investor capital was available and that is what [a lot of] debt funds started off with,” he said. “Pension companies that first invested in the high-yield space want to allocate more of their fixed-income money into things that have a higher return. For that pot of money, they’re not quite ready to go all the way up to the higher risk categories.”

The European commercial mortgage-backed securities market is starting to see some green shoots, with panellists noting that the sector is gaining steam.

Andrea Bora, a Goldman Sachs managing director, has seen a rise in CMBS activity from both borrowers and bond investors.

“There have been some years when the CMBS market has not been a competitive alternative for borrowers,” he said. “However, over the last 12 to 18 months, the number of investors coming into the European market – and ultimately a number of issuing banks, as well as borrowers willing to borrow from CMBS – has definitely increased, which should allow for a larger and more liquid market. There is a large part of the market which could suit CMBS and where CMBS could be a competitive financing alternative.”

Commercial banks that pursue a CMBS execution are tending to stick to shiny assets and specific sponsors, Bora explained.

“We are seeing the alternative lenders doing more [deals involving] traditional assets, higher leverage measures,” he added. “But actually, there is a large part of the market which very suitable for CMBS.”

Banks and other lenders are all doing more business together, noted Klaus Betz-Vais, head of global investors and listed clients at Lloyds Bank. The bank also continues to see debt funds, which gained a strong foothold in the years after the global financial crisis, expand their books.

Betz-Vais said: “Now that there is a big volume of capital going into the private capital management industry at different risk profiles, one could be easily looking at a situation where we are funding a financial sponsor who has taken a mezzanine loan from another sponsor, a senior loan from us which we part sell down to an alternative capital provider who’ve raised money for a senior debt fund, who may then be getting financing for that loan from a bank – which could be an investment bank.”

Looking past the pandemic

“We’ve heard a lot about repurposing buildings from [an ESG perspective],” he said. “If there is a site, an opportunity, [then there is] another role different alternative lenders need to play. It’s often [about] discussing where is all that capital is going to come from and the role of alternative debt funds in that space.”

Panel moderator Henri Vuong, executive director and head of debt research at PGIM, asked the panellists if there were any ticking time bombs with regard to UK buildings needing to reach ESG standards by a certain date and whether the case is similar across continental Europe.

Representing Allianz Real Estate, Shripal Shah, the firm’s UK head of real estate finance, said real estate should be looked at as a long-term investment. He also noted there is an overlay of ESG and sustainability.

“If you’re building better buildings or refurbishing buildings to a [sustainability] standard, theoretically the buildings should hold value longer and attract more occupiers at a higher rent,” said Shah. “On the lending side, we prioritise green lending ahead of anything else after we are happy to underwrite the loan.”

Allianz is aiming to become net-zero in terms of carbon emissions by 2050. On the lending side, it prioritises green lending ahead of anything else.