According to consultancy CBRE’s Q4 2020 data, financing development schemes in Europe’s most mature real estate markets appears to be good business for lenders with a higher risk appetite. “With a little more evidence of pricing intentions, if not bidding, than in the previous quarter, the pricing of prime office development lending reveals an attractive premium for those seeking to substitute construction and leasing risk for credit risk over the short term,” says Dominic Smith, senior director, CBRE Research.

However, CBRE warns that, with fewer development schemes progressing than there are lending transactions on completed buildings, the pricing of prime office development finance is less certain than for investment finance. Differences in pricing between Q3 and Q4 2020 should not be seen as definitive shifts, the consultancy adds. “For a lender comparing the risk of lending to development rather than investment, the former carries risks around construction and leasing on completion, the latter the potential for income interruption – although on prime assets this will be minimised,” says Smith.

CBRE’s data show the margin premium for development over investment debt in the key markets in Europe’s G7 was just less than 2 percent on average, rising to just under 2.5 percent in the ‘rest of west’ markets. However, at the individual market level, the premium was as large as 4 percent, as was the case in Brussels and Amsterdam, or as little as 1.25 percent, as in Paris and Frankfurt. “This suggests there is plenty of opportunity for lenders to enhance returns by carefully targeting favoured assets and markets,” says Smith.

CBRE compared the loan-to-value and margin of investment lending with the loan-to-cost and margin of development loans. It found a marked similarity in the leverage, but significant differences between the margins. “There is a tempting premium overall and, in specific margins for lenders seeking to enhance returns,” Smith says.

“On average, margins on prime office developments are almost double those on investments, with LTC only slightly above LTV,” he adds. “This hides a wide range of outcomes at the individual market level, with Brussels and Amsterdam offering the highest premia.”

CBRE went on to investigate whether markets offering additional margin were simply compensating lenders for additional risk, rather than offering higher risk-adjusted returns.

The consultancy plotted the results in a scatter chart, comparing additional margin on the y-axis with risk on the x-axis. The risk measure was the sum of the current vacancy rate and 2021-22 development pipeline as a percentage of existing stock. A high figure represented high risk. At first glance, there appeared to be a poor correlation between development premia and risk. However, after excluding the central and eastern European markets and the Brussels and Amsterdam outliers, the correlation appeared to be stronger.

CBRE drew two conclusions. First, the mature development lending markets across Europe are broadly well priced, and lenders seeking higher returns will do so at the expense of greater risk. Second, Brussels and Amsterdam appear to offer an opportunity in the form of higher risk-adjusted returns, perhaps due to a lack of liquidity from domestic lenders.

“Development lending terms across the mature European markets are fairly highly correlated with our combined risk measure, suggesting there are no free lunches,” Smith says, “with the possible exceptions of Brussels and Amsterdam”. 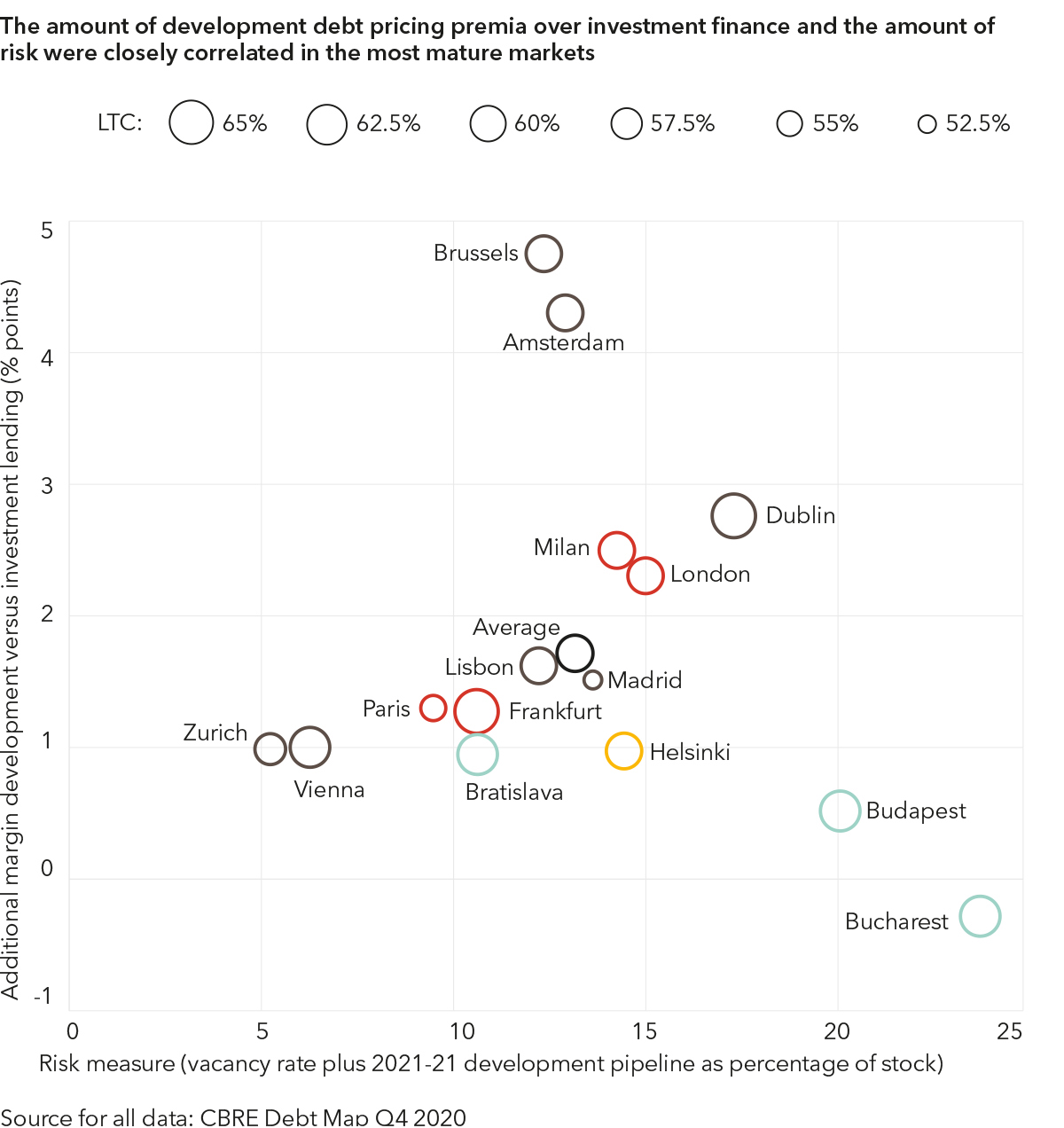