European real estate debt markets faced difficult macro-economic conditions in the third quarter of 2022. However, according to the Q3 edition of CBRE’S European Debt Financing Review, including the global real estate adviser’s quarterly European debt map data, lenders are adapting to the changing economic environment and debt continues to be available. This is especially true for core assets.

Debt markets remained liquid, according to CBRE’s report, and the emergence of debt funds has facilitated the availability of credit across the risk spectrum. Despite this resilience, there is evidence that loan terms and pricing changed in Q3. The total cost of debt recorded dramatic changes, driven by rising interest rates across European economies. The total cost of debt for loans against prime investment properties typically rose by 100-150 basis points from Q2, with a steeper quarterly rise of approximately 250bps recorded in the UK.

The data showed that loan-to-value ratios have reduced for some markets since Q2. Interest coverage ratios will remain the key metric that dictates leverage levels for new loans against prime assets, the global real estate adviser said.

CBRE suggested capital remains available for deployment in debt strategies, and that further allocations by investors to real estate debt may boost this further in 2023.

The prime office sector reflected wider market findings in Q3, with debt markets remaining active, but with changes in lending terms recorded by CBRE throughout the quarter. LTVs softened, with tighter interest cover ratios increasing pressure on the leverage levels that can be sustained for loans against prime assets. LTVs in the prime office sector were recorded at between 50 and 55 percent across the markets monitored.

Lending margins for prime office loans recorded small increases in several European markets as “lenders reflect the uncertainty in the economic outlook into their pricing”, according to CBRE. Margins in these office markets now lie between 90 and 210 basis points. 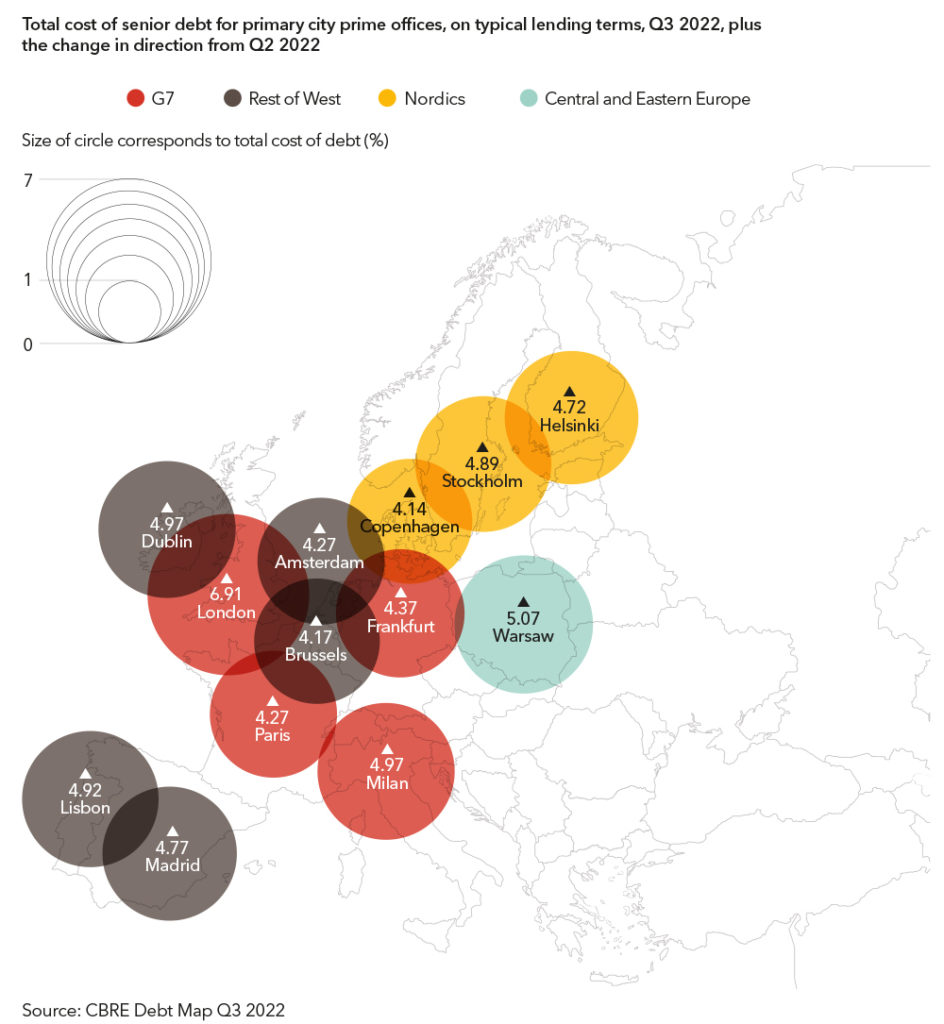 Lending margins across all European markets and sectors monitored by CBRE recorded quarterly rises in Q3, as the debt markets reacted to a volatile macroeconomic climate

Retail: CBRE’s Q3 data suggests prime retail continues to offer relatively strong debt yields and income cover. In most European markets, the cost of debt in the retail sector saw quarterly rises of between 50 and 150 basis points in Q3. The one outlier, London, recorded a quarterly rise of 275bps in the total cost of debt in Q3, driven by rises in the swap rate.

Logistics: Rising interest rates and higher loan margins contributed to higher total debt costs within the prime logistics sector in Q3. Lending margins rose slightly in nine of the 13 markets that CBRE monitored, with increases of between five and 30 basis points. Lending margins sat within the 120 to 200bps range, while overall debt costs for prime assets were recorded between 4 and 5 percent. Once again, the exception was in the UK market, which recorded a total cost of debt of 6.91 percent in Q3.

Residential: A familiar picture was recorded by CBRE for the prime residential sector in Q3; a rising cost of debt in all tracked markets but particularly in the UK capital due to swap rates. Some European markets recorded an increase in lending margins, which generally sat within a range of 120 to 180bps in Q3. “Market-by-market, margins are similar to offices and LTVs mirror those available for other sectors” in the residential sector, CBRE reported.