Inflation concerns and the increased uncertainty in Europe following Russia’s invasion of Ukraine has resulted in a higher cost of real estate debt, according to CBRE’s latest European Debt Map.

The real estate consultancy said that in Q1 2022, lenders remained focused on prime product due to pressures on pricing. Loan-to-values remained stable across the region, while lending margins came under pressure during Q1 due to increasing bank funding costs. Margins increased in 12 of the markets monitored by CBRE, with the most notable change recorded in Frankfurt, where they increased by 30 basis points to 130bps, closely followed by Vienna and the Nordic markets.

The cost of debt increased overall in Q1 2022, remaining stable only in Zurich. All other European markets experienced considerable rises, particularly in the G7 countries, which recorded a rise of 104bps in the first quarter of the year – the highest level since 2014, according to CBRE.

Overall debt pricing for G7 countries and Western Europe was in the 2.15-2.95 percent range in the first quarter of the year, excluding Lisbon, Zurich and London, which respectively recorded debt pricing of 314bps, 100bps and 379bps. In May, the Bank of England increased UK interest rates to 1 percent, the highest level since 2009. This was reflected in the region’s higher cost of debt, despite LTVs and margins remaining stable from the previous quarter. 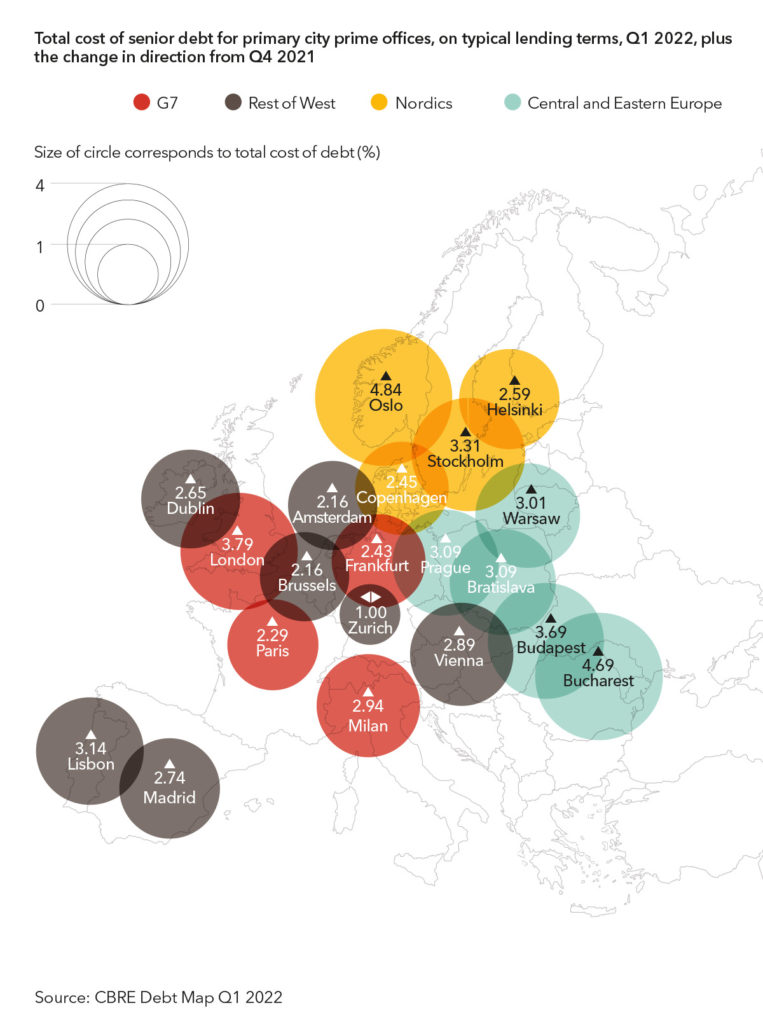 CBRE’s data shows that an increase of funding costs and risk premia prompted lenders to increase margins in the retail sector in the first quarter of 2022. Despite this, caution remains in the traditional shopping centre segment and fashion-led retail schemes, according to the real estate consultancy.

All but two markets, Dublin and Lisbon, recorded stable headline LTVs, reflecting the ongoing improvement in sentiment in supermarkets and food anchored retail warehousing. Most markets featured LTVs of 55-60 percent in CBRE’s Debt Map survey. However, the outliers are London, Dublin and Milan; regions recording 50 percent where retail stock per capita is higher.

In the first quarter of 2022, there was a moderate rise in margins due to the rising interest rate environment across all European markets measured in CBRE’s data, with Scandinavia recording the biggest quarterly rise at 22bps.

Continued confidence in the logistics sector