Lenders are becoming increasingly selective and focusing on the strongest transactions in a time of economic volatility, according to data from CBRE’s latest European Debt Map.

The real estate consultancy said that in Q2 2022, debt markets remained active for core assets. For prime offices, loan-to-values were still broadly stable in most markets across Europe, with the exception of Brussels, Amsterdam and Copenhagen, which all recorded quarterly LTV declines of between five and 10 basis points. Despite the broadly stable picture recorded in the second quarter of this year, the economic landscape is changing. CBRE notes that close monitoring of European markets will be required to gauge the impact that rising interest rates will have on lenders’ risk appetites as these feed into investment markets and valuations.

Higher lending margins were seen in many prime office markets in Q2 2022, due to a combination of the weaker economic backdrop and lenders own funding costs being translated into higher lending margins, according to CBRE. The largest recorded movement in margins were in the Rest of the West group and cities in the G7 countries, with increases of 12 basis points and 8bps respectively. This upward pressure on lending margins has been moderated by the weight of capital, according to CBRE, as lenders compete to deploy finance for prime transactions.

The overall cost of debt increased in all markets covered by the CBRE European Debt Map during Q2, rising by between 70bps and 112bps across Europe. The rising underlying interest rate environment and higher margins are the reasons behind the increases across the board, according to the real estate consultancy. 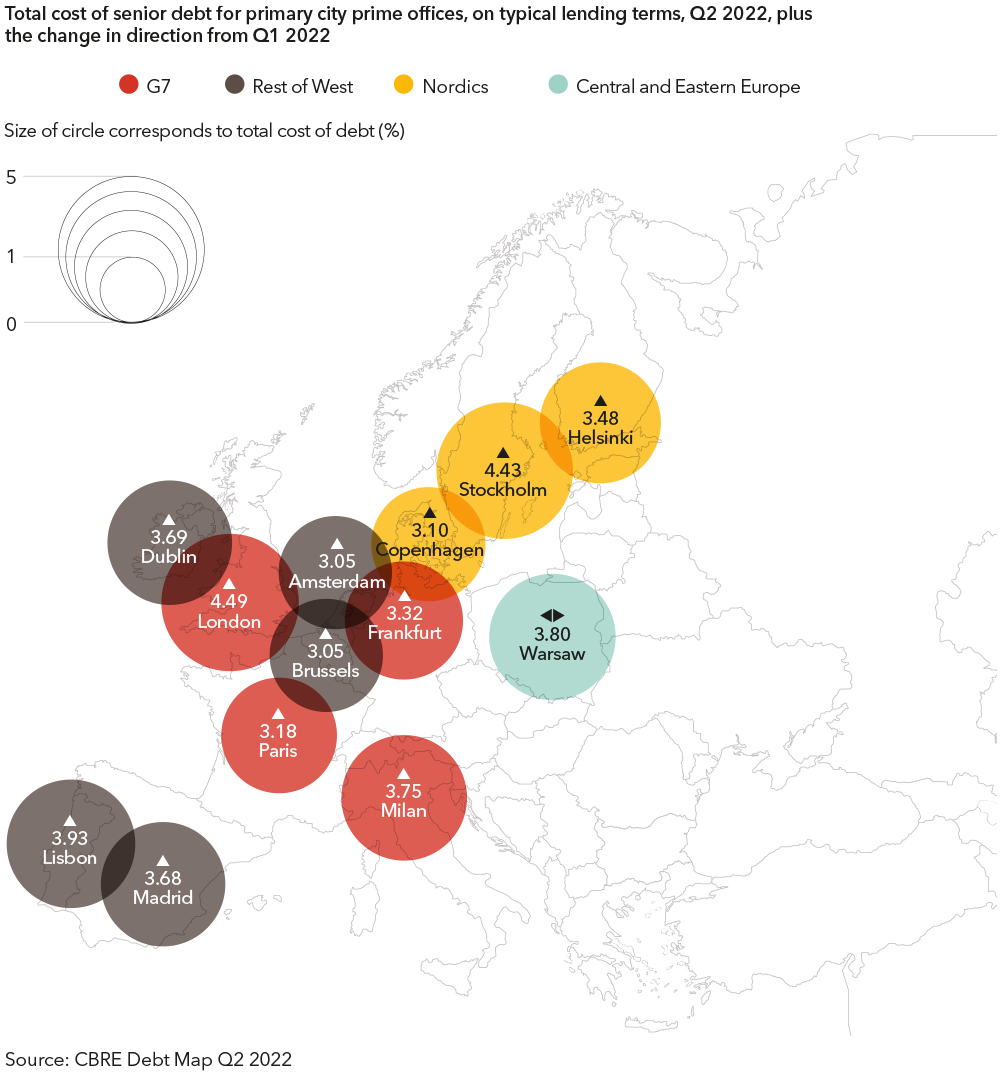 Unlike the other core sectors measured by CBRE’s Debt Map data, headline LTVs in the retail market remained steady in almost all regions, reflecting a stable sentiment in the prime retail segment. LTVs remain in the 55 percent to 60 percent range for most European markets except London, Milan and Dublin, where LTVs are more conservative at 50 percent.

CBRE observed that lenders are “generally more comfortable where transactions are acquisitions, where an open sales process has set the valuation and new equity is injected”.

According to CBRE, lenders are particularly keen to see recent evidence of rent rebasing, with a timescale of the last six to 12 months. The retail credit market matches other core sectors with the recorded cost of debt across European markets during Q2.

As with the office sector, the retail market has recorded cost of debt increases in all regions measured by CBRE, due to the rising interest rate environment coupled with moderate margin increases.

All country groups across Europe saw an increase in the overall cost of debt by between 84bps and 121bps, with the greatest change being recorded by cities in the G7 countries.

LTVs begin to soften in the logistics sector