The strength of an asset’s income and the certainty of its occupancy continue to drive the best debt pricing and terms in European real estate markets, according to CBRE’s Q1 2021 Debt Map report.

The real estate consultancy’s latest European Debt Map data show there was little change to the terms in most prime office senior lending markets during the first quarter of 2021.

CBRE observed that the clustering of pricing seen in Q4 2020 remained the case in Q1, with Zurich, Frankfurt, Amsterdam, Paris and Brussels offering debt within a 1 to 1.31 percent range. Lisbon, Vienna, Milan, Dublin and Madrid continued to be priced in the 1.8 to 2.15 percent range. CBRE noted that London now has one of the highest costs of debt due to a sizeable increase in the five-year swap rate. 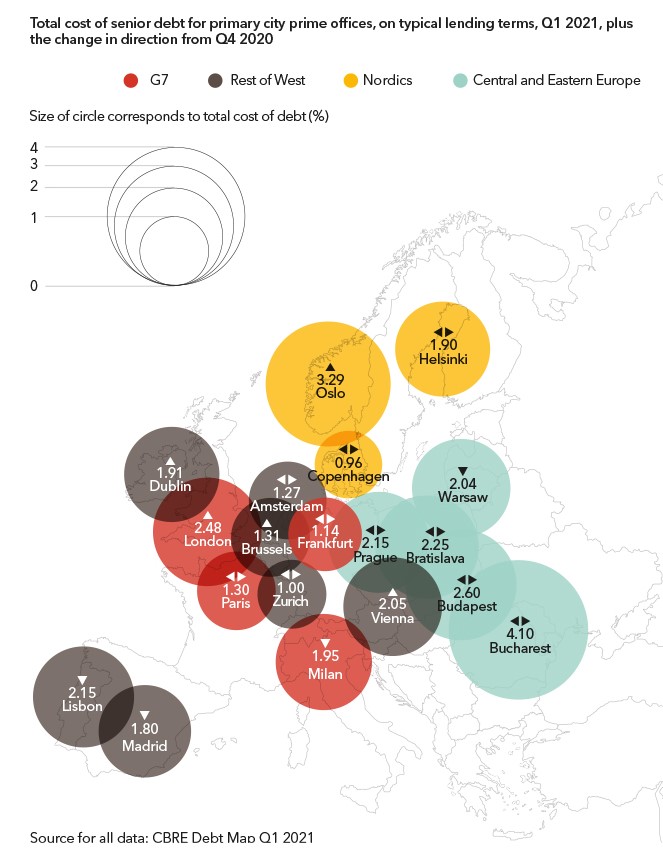 In prime retail, the consultancy said transactional evidence remains thin: “Supermarket or food-anchored retail is more positive, and there are some early green shoots on the willingness to look at retail warehouse-type asset classes. Where lenders are willing to transact, it is typically the debt funds or alternatives – hence higher LTV, at commensurate margin, in some markets.”

Prime retail LTVs remained largely stable, with 14 of 17 markets unchanged from Q4 2020. However, margins increased in the so-called ‘G7’ markets – except in the UK, where they were already higher than the other markets.

The weight of money in the logistics sector continued to force down the price of debt. The consultancy said lenders “follow investors in increasing exposure to the best-performing sector of recent years”.

CBRE said prime office development lending provides an attractive premium for those lenders seeking to substitute construction and leasing risk for collection risk in the short term: “The market remains thin with limited development schemes being brought forward or financed, though there are signs that we are turning the corner.”

The data show that, in the G7 markets, the margin premium for development remained at more than 2 percent on average. In certain markets, the premium was more than 4 percent.

Few could have predicted the impact the pandemic would have on the various sectors of the real estate market. But while the more traditional sectors have faced challenges, some more specialist areas of the market have flourished.

Data centres have been an unlikely winner. The overnight transition to working from home left companies needing greater access to cloud technologies and enhancing their IT reach. As such, the new supply of data centre space is forecast to reach 373MW by the end of 2022, with take-up anticipated to hit 330MW, up from 201MW in 2020.

This growing demand has been highlighted by recent transactions, including the acquisition and capex debt facility CBRE raised for US investor IPI Management to purchase SuperNap Italia in Milan, southern Europe’s most advanced data centre; and the €555 million pan-European data centre portfolio CBRE sold on behalf of Digital Realty to Singapore’s Ascendas REIT.

We are certainly seeing more debt providers recognising the attractiveness of this asset class, demonstrating a willingness to finance both ground-up developments and standing assets in good locations. With large data centre portfolios rarely available for purchase, I anticipate strong competition to finance the sector.