Since the end of 2018, property yields have fallen in 16 of the 20 office markets continually covered by real estate consultancy CBRE’s European Debt Map. The exceptions are Copenhagen, Dublin and London, which remained static at 3.7 percent, 4 percent and 3.75 percent, respectively, according to the firm’s data. Meanwhile, Oslo was 15 basis points up, to 3.65 percent.

The general downward pressure has pushed European markets further into low-yielding territory. Four markets have yields of 3 percent or lower – Amsterdam, Frankfurt, Paris and Berlin – and only six are above 4 percent, comprising Brussels and the five central and eastern European markets covered in the research: Bratislava, Bucharest, Budapest, Prague and Warsaw.

The average margin across the 20 markets covered by the research has fallen by 15 basis points during the first three quarters of 2019. Smith adds that, in theory, there has also been a fall of around 60bps on the swap rate component, although in practice, the reduction in returns to lenders has been much less because of zero percent floors in nearly all loan terms. “And while prevailing loan-to-values have almost universally remained unchanged at a headline level, falls in yields mean they have not remained static in effective terms, raising the prospect that lenders are taking on more risk while receiving less return,” Smith says.

CBRE explored this by charting the progression of debt yield – a key risk measure for many lenders – over the year to date for an example market, for which Amsterdam was selected. 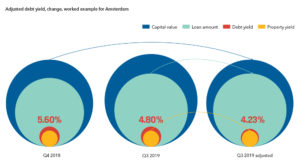 The firm also showed an additional measure, the adjusted debt yield, which uses Q3 2019 LTV and property yields, but Q4 2018 property values. Smith explains that this shows how the change in property yield and capital value over the year has affected the debt yield, compared with the starting point at the end of 2018, even if nominal LTV has remained unchanged. In the example of Amsterdam, where LTV has remained at 62.5 percent on a nominal basis, the nominal debt yield was shown to have fallen from 5.6 percent to 4.8 percent as a result of the property yield falling from 3.5 percent to 3 percent. However, adjusted debt yield fell even further, to 4.23 percent, when the current 3 percent property yield is compared with the Q3 2019 loan amount versus the Q4 2018 property value. “The reduction in debt yield, in other words, is arguably almost twice as great in percentage point terms – 137 percentage points, rather than 80 percentage points – as is widely acknowledged,” says Smith.

He adds that, arguably, increased risk is not something to be concerned about in isolation: “It should only be troubling if those taking the risk are not being compensated for it.”

CBRE also compared the change in debt yield and adjusted debt yield with the change in the total costs of debt – the total return from debt from the lender’s perspective. This shows the extent to which an increase in risk is a factor across almost all 20 markets, and how this has been almost universally accompanied by a decrease in returns. “In other words, for lenders, the risk/reward balance has become appreciably worse over a relatively short space of time,” says Smith. “In such a scenario, selecting the right opportunity takes on even greater importance.”