After a subdued H1, European investment volumes picked up. Data from consultancy CBRE show third-quarter volumes reached €69 billion – the first time in five years that a Q3 outperformed a Q2, and only a 4 percent year-on-year drop. Excluding the UK from the data, the volumes were 4 percent higher than the same period in 2018, at €56 billion – a record for Q3.

CBRE’s European Debt Map for Q3 recorded shifts in pricing, almost all of which favoured borrowers. In six of the 20 markets analysed, margins declined. In Milan, margins fell by 25 basis points to 1.5 percent, and there was compression of 5-15bps in Amsterdam, Brussels, Lisbon and Oslo. There was one change to the typical loan-to-value ratio, with headline terms in Helsinki nudging down from 60 percent to 55 percent. Helsinki margins declined by 30bps, reflecting the lower LTV. The only market across CBRE’s sample that saw an increase in pricing was Warsaw. 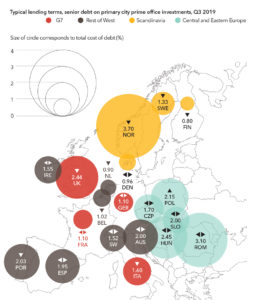 Most markets saw interest rates move further into negative territory over the period. CBRE uses the five-year swap rate as a proxy for the interest component of real estate debt. Euro-, sterling-, Swiss franc- and Danish krone-denominated swaps all fell – by 18bps, 30bps, 6bps and 17bps, respectively, over the third quarter.

Although the extent of the decline in interest rates into negative territory is eye-catching – euro swap rates are down 61bps so far this year – CBRE does not believe this is having a widespread impact on returns for lenders or costs for borrowers at this stage. Although the consultancy reports examples of lenders removing interest rate floors from loans, it says this has been done on a selective basis, dependent on sponsor, the underlying asset, the LTV level and, crucially, on the loan not being syndicated. The firm adds that in almost all loan deals, lenders continue to apply a zero percent floor to the interest rate component of pricing.

It is important to note that, since the Q2 edition of this data was published, CBRE has changed its methodology to assume the reference rate is zero, rather than to incorporate negative rates into the total cost of debt. It argues that this reflects lending industry practice where floors are typically applied. Calculations for Q2 have been revised in accordance with the methodology.

The average cost of debt for the 20 markets covered by CBRE’s research is now 1.77 percent, down from 1.82 percent in Q2 and 2.14 percent in Q4 2018. Seven markets – Brussels, Copenhagen, Helsinki, Paris, Frankfurt, Amsterdam and Stockholm – now have a total cost of debt on senior lending against prime city offices below 1.5 percent. Only three markets have a total cost of debt above 2.5 percent – Bucharest, Oslo and London – the latter two markets having higher non-euro-denominated interest rates.

Lenders react to the growth of multifamily

Multifamily is now Europe’s second largest sector after offices and is cemented as an asset class in the minds of institutional investors. For years, residential has been dominated by the private ‘build-to-sell’ model. This has evolved into a range of provision, including student, micro-living, co-living, build-to-rent, senior living and affordable housing.

The lack of new housing after the financial crisis has led to undersupply in many countries. This, combined with mortgage and affordability restrictions, changes in taxation, the emergence of the ‘experience generation’ and the increased number of people seeking centrally located accommodation, is driving demand for professionally managed rental stock across Europe.

Lenders are targeting this growth and, in core markets, we are seeing competition to finance this type of asset. In the UK and Ireland, there is strong appetite to lend. In emerging markets, lenders can take time to get comfortable with backing developments where repayment is based on underwriting market assumptions around rents and operating costs. Where there is a lack of evidence about demand or the operating experience of professional managers, lenders tend to be even more reticent. But as residential increasingly becomes integrated within mixed-use schemes, the lending market will adapt.

As a borrower, it is important to partner a lender that understands the nature of the offering and the operational challenges with this type of asset. It is still a nascent sector compared with the US, but it is here to stay.