The amount of leverage available from lenders was also largely unchanged from the previous quarter. 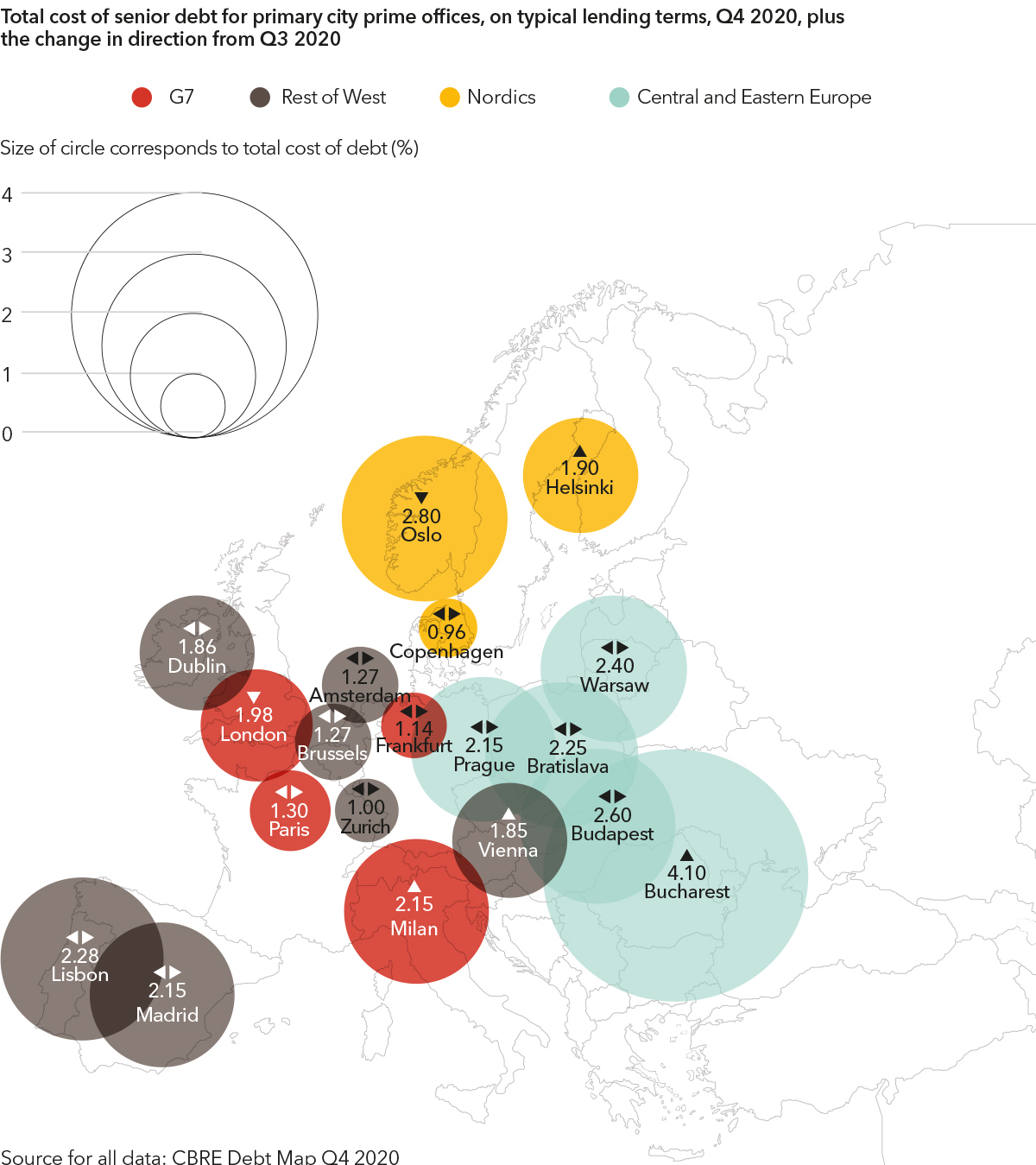 Among the G7 member markets, terms were similar in Paris and Frankfurt, with LTV at 60 percent in both, and margins at 1.2 percent and 1 percent, respectively.

However, the Milan and London markets were more expensive for borrowers, with margins 45bps to 100bps higher and LTVs between 2.5 and 5 percentage points lower.

The markets referred to by CBRE as ‘rest of west’, including Brussels, Amsterdam and Zurich, ended the year at the cheaper end of Europe’s debt spectrum – largely in line with Paris and Frankfurt – while Dublin, Lisbon and Madrid were at the more expensive end, similar or more expensive than Milan and London.

In the retail property sector, margins increased by 40-50bps during Q4, although LTV generally dropped by 3 to 4 percentage points during the quarter.

Overall, CBRE reported relatively stable lending terms against retail property during Q4 2020. LTVs were unchanged in 12 out of 17 markets and margins in eight.

The company noted that some adjustments to retail lending terms in its Q4 data were partly due to adjustments having not been observed in Q3 owing to a lack of liquidity. These included a 5-percentage-point increase in LTV and a 50bps decrease in margins in the London market.

“This should not necessarily be seen as an improvement in confidence, just greater clarity of pricing – at a level still considerably more expensive than most peers,” says Paul Coates, head of CBRE’s debt and structured finance division in Europe.

The same groupings of markets by debt terms that were seen in the office sector were also apparent in the retail sector.

Debt was cheaper in Paris, Frankfurt, Brussels, Amsterdam and Zurich than it was in Milan, London, Dublin, Lisbon and Madrid. On average, LTVs were around 3 to 4 percentage points lower, and margins around 40bps to 50bps higher for retail debt.

CBRE noted only minor adjustments to senior lending terms for prime logistics in Q4. It added that the changes were generally representative of increasing confidence in the sector. The company said cases where pricing appeared to increase, as in Milan and Vienna, were likely to have been the result of a lag in evidence of deals, which reflected the price hike seen during Europe’s initial wave of lockdowns.

Overall, logistics debt in Q4 was priced similarly to offices, which CBRE said reflected lenders’ appetite to increase exposure to the best-performing mainstream sector in 2020.

“The anti-fragility of the logistics occupational market, coupled with the strength of investment demand, has been reflected in resilient lending terms,” says Coates. “Pricing is much closer to offices than retail, and is trending stable or stronger.”

The consultancy showed there was little difference between office and logistics lending terms in the G7 markets.

“Margins are identical everywhere, except Germany, and LTVs are the same, except in France, where logistics leverage is a little higher,” Coates explains.

Similarly, in the ‘rest of west’ markets, logistics margins were equal to those in the office sector in four markets, but slightly lower – albeit with slightly higher LTVs – in Dublin, Lisbon and Madrid. Averages of prime logistics lending in the Nordic and central and eastern European markets were also very similar to prime office pricing.