The weight of capital targeting real estate, international investors’ appetite for prime product and the rise in logistics and alternatives will support a steady performance from European property markets in 2018, industry figures have predicted.

“In 2018, we expect a year of stability,” was UBS Asset Management’s take on global real estate, with the firm forecasting “limited opportunity for further yield compression but not yet a sizeable decrease in capital values”.

The European Commission’s most recent predictions for eurozone GDP growth stand at 2.1 percent for 2018, before easing back to 1.9 percent in 2019. 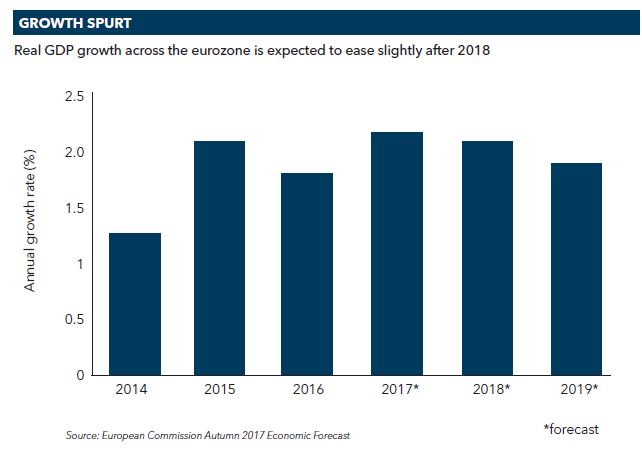 Speaking at a 2018 UK predictions event in London in January, JLL’s head of UK research, Jon Neale, remarked that property is following the wider growth trend. “One thing that characterised 2017 was political confusion and chaos, but no one told the global economy, which is in something of a boom period,” said Neale. Noting estimated UK GDP growth of 1.6 percent in 2017, Neale added: “Brexit is not having as negative an effect as it could be, and property is following suit.”

JLL predicts that UK investment volumes will hit £55 billion (€62 billion) this year, down on 2017’s £60 billion, but significantly ahead of 2016’s £42 billion. All-property returns, the firm predicts, will be around 6 percent, down from a forecast-busting circa 10 percent in 2017. Logistics, the firm notes, propped up UK returns last year, which otherwise would have been in the order of 7 percent to 8 percent.

An economic uptrend in Germany, seen in 2017 GDP growth of 2.2 percent, is set to continue this year, CBRE predicts. Transaction volumes topped €57 billion in 2017, with the agency expecting a similarly robust performance from 2018.

Aviva Investors predicts that if current eurozone growth continues at its current pace, it is likely to reach full economic capacity at the end of 2018. “Until then, inflation should remain muted, lagging the 2 percent target set by the ECB,” writes real estate investment analyst Monika Sujkowska.

“The bank will be able to take its time in normalising monetary policy, and with monetary conditions remaining loose, real estate will continue to look relatively attractive compared with other asset classes, driving further investment activity. By late 2018 or early 2019, however, the ECB is likely to begin hiking interest rates from their current, unprecedentedly low levels,” she adds.

However, most play down the impact of interest rates this year. Addressing the potential for rising debt costs as a result of the actions of the US Federal Reserve, JLL’s Neale argued that the issue is “nothing to worry about quite yet, certainly not in 2018”.

Aviva’s five-year outlook indicates that 2018 will be the final year in which investors can expect strong returns on European property. The insurer forecasts 6.7 percent in 2018 across prime European property, with the average annualised return to drop to 2.6 percent between 2018 and 2022. “A normalisation of yield levels from 2019 is the main reason behind our forecasts for softer returns, with the impact unlikely to be sufficiently offset by rental growth,” writes Sujkowska.

“Real estate debt,” Sujkowska adds, “is likely to offer better risk-adjusted returns than equity investments, as it will shield investors from the impact of capital declines.”

Debt markets are expected to be liquid in 2018, partially on the back of funds raised in 2017 and partially due to new entrants into the space, including French asset manager Amundi, planning to raise capital for debt strategies.

Overall, real estate is likely to keep its edge, for the time being. While rates might creep up, the fact real estate is attractive compared with alternative investment options will remain the fundamental driver of capital into the sector this year. The biggest question, and the most difficult to predict, is when will the long-anticipated real estate market correction happen?