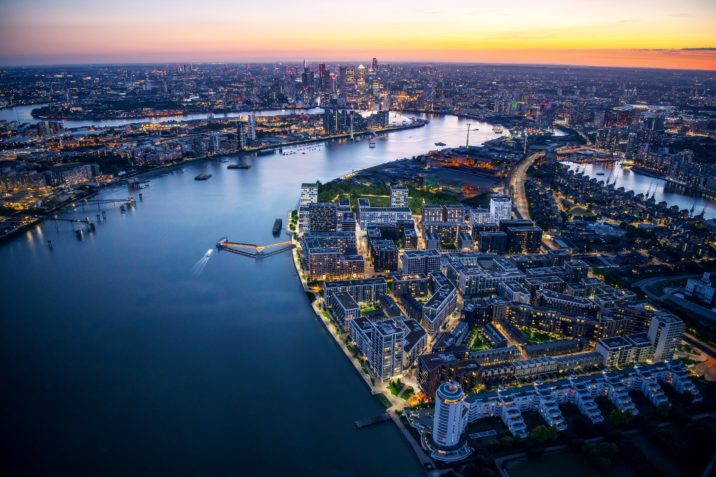 On 16 June, Cain International, the privately owned real estate equity and debt investor, announced it had provided a £170 million (€199 million) loan to fund the construction of Deanston Wharf, a 768-unit residential scheme that forms the final element of a housing-led masterplan for the Royal Docks district of London’s Docklands.

The deal represents a large lender commitment to a construction scheme at a time when the pandemic has created uncertainty around delivery timeframes for big projects. It also represents a major investment by a debt provider in the sought-after residential sector in one of the UK capital’s largest-scale development areas.

The facility was provided to Irish developer Ballymore and Singapore-based developer Oxley Holdings. Deanston Wharf will sit adjacent to Royal Wharf, a 40-acre residential development Ballymore completed in December 2020 and which it has described as “one of the last opportunities to build a new town within London”.

The loan, a four-and-a-half-year term facility with an extension option should the developer need it, will fund the construction of 561 of the 768 units. Investment manager Legal & General announced on 22 June that it had agreed to buy the remaining 207 homes, which are to be delivered as a mix of social rent and shared ownership housing.

According to Graham Keable, principal at Cain International, Ballymore’s experience of delivering and selling residential units with similar characteristics in the Royal Docks area was key to its decision to fund the project. “In November last year, we were presented with this financing opportunity that ticked all our boxes. We liked the sponsor, the location and their track record in the area where, over the past six to seven years, they have built over 2,000 units,” he told Real Estate Capital.

Although Cain had aimed to partner with Ballymore for several years, this was the first time it managed to fund one of its construction projects. According to Keable, the lender’s ability to provide a senior loan for the entire project was key to its success in securing the deal. “We were able to provide the developer with the speed and efficiency they needed to continue with their delivery pace,” he said. “Any pause in the construction process could have further slowed down the scheme’s delivery time.

“Most of their relationship banks would not have had the capacity to provide a single loan individually. They would have rather split the financing between at least two bank lenders, which would have made it more difficult for Ballymore to get the certainty and speed in the financing they were looking for.”

A factor in Cain’s decision to back Deanston Wharf, according to Keable, was that it is targeted towards what he described as the ‘mid-market’ of the London residential sector, rather than the luxury end of the scale.

“This is about selling affordable homes to the average Londoner. When looking at the sales data of similar schemes in the area, we see that mid-market residential units continued trading in 2019 and 2020. They were still being bought, sold and resold, demonstrating the liquidity of the product set within its geography.”

Proposed pricing information for Deanston Wharf was not available. However, according to estate agent Rightmove, properties in the adjacent Royal Wharf had an overall average price of £533,528 over the last year. Such prices would be towards the upper end of the scale in many UK locations, although the average London property value rose 3.3 percent annually to £491,687 in April, according to the UK House Price Index.

To protect Cain against unexpected events that could affect the construction process, including potential labour supply constraints, Keable said the firm underwrote the financing on a cautious basis.

“We monitored the level of the contingencies in the project. We have appropriate cost overrun protections within the structure, which were calculated on a pragmatic blended basis across the project costs and forecast,” he explained. “We ensured that, within the funding structure, there was a reasonable amount of latitude to tolerate any changes on the sale side, build side, or build cost side.”

Keable acknowledged there are risks involved in the fact Ballymore is adopting a construction management model for the project, through which it will directly employ multiple sub-contractors. He added that most lenders prefer their developer sponsors to appoint a single main contractor to manage the project.

“From a lending perspective, the lowest risk type of construction for a scheme is a fixed-price design-and-build contract with a top tier contractor. With Ballymore’s model, if the construction trade package price goes up by, let’s say, 10 percent, that would not be covered as it would be under a fixed price contract, which is why it is perceived as higher risk for lenders.”

However, Keable added that the benefits offered by this procurement route outweigh the risks when the developer is an experienced player like Ballymore. “This model offers the developer enough flexibility to decide how and when it places and administers the different trade contracts,” he said. “And that is how Ballymore has built over the years, so they have long and deep relationships across the supply chain to make it work.”