“Buildings generate nearly 40 percent of global greenhouse gas emissions. As a financier, we are in a privileged position to ensure that the energy efficiency of buildings is taken into account or improved by existing owners.”

Christof Winkelmann, board member at Aareal Bank, following the bank’s first green loan governed by its Green Finance Framework, says Aareal intends to grow the share of green buildings in its loan portfolio.

Office space
Last week, US lender Morgan Stanley launched a £150 million securitisation of a June loan secured by London’s Aldgate Tower – its first issuance of 2021 from its European commercial mortgage-backed securities series. The CMBS – Viridis (European Loan Conduit No. 38) DAC – finances the 16-storey office building located on the City of London’s eastern boundary, which US manager Brookfield and insurer China Life bought for £346 million in 2016 – financed by Germany’s LBBW. Morgan Stanley is backing the building at a time when its owners have some space to fill. According to rating agency DBRS [read its provisional ratings announcement here], serviced office operator WeWork recently vacated, meaning the building is 72 percent occupied. DBRS said Savills valued the building at £330 million in April and estimated the current fully occupied market rent at £18.8 million, versus the contracted rent of £12.8 million at the time. Morgan Stanley’s backing suggests it is confident the tower’s owners will bring in new tenants, despite the current uncertainty in the office market.

Supporting decarbonisation
Aviva Investors, the investment manager of UK insurer Aviva, has provided a £276 million climate-focused loan to UK commercial property owner Bruntwood to support its decarbonisation efforts. The borrower will use the 15-year, sustainability-linked loan – secured against 22 office assets primarily located in Manchester and Birmingham – to consolidate and extend the maturity of its long-term funding facilities until 2036. As part of the deal, Bruntwood has agreed to sustainability performance metrics, focused mainly on reducing carbon emissions and procuring green energy. The deal is yet another example [see our recent coverage of sustainable financing] of a lender and borrower baking environmental sustainability into the terms of a loan facility. Aviva itself pledged in December 2020 that it would originate £1 billion in sustainable property debt over the next four years.

Social bonds
As well as a focus on environmental sustainability, the real estate industry, and those that finance it, is spending more time thinking about societal impact [see more on the topic here]. In the debt space, there have been occasional examples of facilities structured to incorporate social targets, although ‘social’ real estate finance remains in its infancy. There was, however, an interesting example in the capital markets last week. Retail Charity Bonds, a platform through which bonds are issued to raise debt finance for charities [read more about it here], announced the launch of a 3.25 percent bond issuance on behalf of Golden Lane Housing – a provider of quality homes to people with learning disabilities in the UK, which was launched by the charity Mencap. The proceeds of the issue will be used to refinance existing debt from RCB and fund the acquisition and adaptation of properties for people with learning difficulties [the issue announcement can be read here]. The offer period ends on 16 July.

NPLs to rise, but not surge
Property consultancy JLL this week provided a glimpse of its first European NPL Market Update report [you can register to receive the full report here]. Drawing on European Banking Authority data, JLL said non-performing loan volumes are set to rise, but not surge, in the near term. It put the lack of a surge down to lender forbearance – with forborne loans up by 7.6 percent in Q1 – and government-backed loan schemes. As a result, it said the NPL ratio fell by 10 basis points to a decade low of 2.5 percent in Q1. But Ian Guthrie, senior managing director in JLL’s loan advisory and restructuring services division, said pressure on the banking sector is expected to increase next year, resulting in more underperforming loans and NPLs, due to an uneven recovery across countries and sectors.

Investors eye getaways
A survey of 50 real estate investors, including private equity firms, funds and real estate investment trusts by consultant Cushman & Wakefield revealed more than a third are looking to buy more hotels in Europe. However, it also showed resorts and serviced apartments are more popular among them than airport hotels, or so-called MICE hotels – those centred around hosting meetings, incentives, conferences and events. 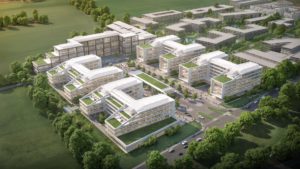 Cain sources €100m for its German debut
Cain International, the privately owned real estate equity and debt investor, alongside property manager FREO Group, has sourced a €100 million loan from German bank Hamburg Commercial Bank to fund the development of an office campus in Munich [read the bank’s announcement here]. Cain announced on 29 June it had acquired, through its European Real Estate Opportunity Fund I, a 50 percent stake in Koryféum, an 865,418 square feet office development in Unterschleißheim, in northern Munich, representing its debut transaction in the German market. The six-building campus will be delivered in three phases, with the first due in H2 2022. Daniel Harris, head of European investments at Cain, said: “Sentiment around the German market has remained positive throughout the pandemic, while Munich in particular has seen a high level of investor interest as a result of its limited high quality vacant space and stable rental prices.”