“It is a huge opportunity for investors and lenders alike in this coming cycle to ensure they adopt sustainable business principles. A lot of this is about the repurposing of real estate, as we come out of this terrible pandemic.”

Blackstone assesses European credit opportunities
Over the last decade, Blackstone Real Estate Debt Strategies has grown to become one of the largest businesses within US investment giant Blackstone’s portfolio, as well as one of the largest non-bank real estate lenders active in Europe. It currently has $30 billion of real estate debt assets under management, up from $10 billion five years ago. Of the overall BREDS lending business, Europe represents 34 percent.

Last week, Blackstone announced that Steve Plavin, formerly the chief executive of listed credit vehicle Blackstone Mortgage Trust, based in New York, has taken over as head of BREDS in Europe, and will relocate to London this summer. He has replaced Michael Zerda, who left to rejoin LaSalle Investment Management.

Speaking to Real Estate Capital, Plavin said once European markets reopen and resume their economic activity, a broad range of lending opportunities are likely to emerge for the credit platform. According to the debt expert, tonnes of capital have been raised by managers in recent months for opportunistic and core-plus real estate transactions. This should in turn create more financing and refinancing opportunities, as Europe emerges from the pandemic. Our full interview with Plavin will be published on recapitalnews.com this week.

KKR’s retail risk
KKR is taking a run at the retail investor market. One person involved in the fundraising process for KKR Real Estate Select Trust put it more boldly, telling affiliate title PERE the firm has taken the “next step in democratising access to institutional private real estate”. Last week, KKR launched KREST, a continuously offered, registered closed-end fund. The do-it-all vehicle will be invested in a swath of property types in the US and abroad, with the option to deploy into various parts of the capital stack – including debt as well as equity.

Separating the vehicle from its peers is how it has been registered with the Securities and Exchange Commission. Rather than claiming an exemption as most non-traded REITs do, KKR chose to register KREST under the Investment Company Act of 1940. Effectively, KKR is opening itself up to more regulatory scrutiny in exchange for easier access to individual investors. Be sure to check out PERE’s detailed analyses on the fund this week.

BlackRock backs ‘affordable’ beds
BlackRock’s debt investment in the shared-ownership sub-sector of the UK residential market demonstrates how institutional investors’ search for stable and predictable income is increasingly driving them into niche pockets of the property market.

The world’s largest asset manager, through its real estate arm, was the majority lender in a £362 million (€419 million) acquisition financing for 3,000 shared-ownership homes by UK shared-ownership housing provider Heylo Housing. Funding for the acquisition comprised £262 million of index-linked and £100 million of fixed-rate facilities provided over 25 years. The deal marks BlackRock Real Assets’ 18th investment in the UK residential sector, in which it has so far committed £1.1 billion.

Savills IM’s credit ambitions
According to Alex Jeffrey, the global chief executive of Savills Investment Management, its credit platform – DRC Savills Investment Management – can become “one of the leading players in global debt investing”. Jeffrey spoke to Real Estate Capital following the announcement that Savills IM, the  investment arm of consultancy Savills, had exercised its option to buy the remaining 75 percent it did not already own of DRC Capital, the London-based debt fund manager launched by former property bankers in the wake of the global financial crisis.

Jeffrey previously ran M&G Real Estate, a business which has operated debt as well as equity strategies for years, meaning he was always likely to take a positive view towards credit’s inclusion in a real estate manager’s offering. Jeffrey explained that clients with a background in equity investing are increasingly seeking access to debt strategies. Real estate’s biggest managers, it seems, view a lack of debt strategies as an omission from their suite of investment products.

Retail restructuring
As Real Estate Capital has previously written, the UK’s retail real estate market is a tough place to be. One of the highest-profile casualties of the shopping property crisis was mall owner Intu Properties, which collapsed into administration last August. However, on 20 May, SGS, which owns four former Intu centres, announced a financial restructuring that will create an “independent platform from which the business plan and exit strategy can be delivered to protect value for stakeholders”.

The four malls in question – Atria Watford, the Lakeside in Essex, the Victoria Centre in Nottingham and Braehead near Glasgow – are financed by £1.15 billion of bonds and a £142 million term loan from a syndicate of lenders. SGS announced a long-term restructuring with the term lenders and noteholders accounting for 61 percent of the value of the notes. It said the debt deal provides new funding for cap-ex. Global Mutual and Savills, respectively asset and property manager of the schemes, now plan to improve rent collection, secure anchor tenants’ leases, and add new drivers to footfall in a bid to improve the schemes’ prospects.

Living on the edge
In Europe, data storage is a highly concentrated affair. Four cities (London, Dublin, Frankfurt and Amsterdam) account for 56 percent of the live data centre capacity in the region, according to the brokerage Newmark Knight Frank [read more here]. But usage is on the rise throughout the continent and well-capitalised specialists in the space are acting accordingly. Last week, Digital Colony formed a joint venture with Liberty Global – the parent company of Virgin Media and other video/broadcast brands – to develop data centres across Europe. Focusing on edge data centres, small facilities that support localised cloud computing in densely populated areas, the JV has identified Switzerland and Poland as key target markets alongside the likes of the UK and Ireland.

High returns
Financial consultancy bfinance conducted a survey of real estate debt managers to find out how they are delivering 7-10 percent net returns in the field of property credit. The results showed a variety of strategies are being employed. 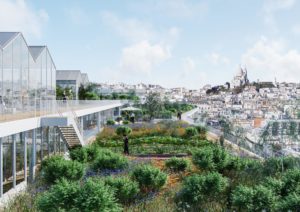 Allianz helps make Paris’s 18th arrondissement greener
Speaking to Real Estate Capital in May, Roland Fuchs, head of European real estate finance for Allianz Real Estate, explained that the sustainability credentials of a private rented sector residential asset in London’s Canary Wharf was crucial to the company’s decision to finance it. Last week, the property arm of German insurer Allianz announced its latest financing deal, which, it argued, demonstrates its ambition to strengthen its position in green financing.

Allianz provided around €144 million of a €185 million loan, alongside BNP Paribas Real Estate, to Icawood – an investment vehicle specialising in low carbon emission office developments – for a complete redevelopment of an asset in the 18th arrondissement of Paris. The loan will fund the development of the mixed-use scheme, which has a working title of Marcadet, and will comprise office and retail space, as well as a 78-room student residence. According to Allianz, the new complex will benefit from the sponsor’s “innovative features” – a solid wood cross-laminated timber structure built on top of a completely restructured existing base – which will be implemented by French developer WO2. WO2 is also the project manager of Icawood’s Arboretum, a low-carbon office campus, currently under construction, for which Allianz provided a €200 million loan in June last year.