“The outlook for new loans origination remains very strong as the investment manager has seen significant activity across the hospitality and retail sectors and in office spaces as the UK and Europe starts to return to pre-pandemic activity levels.”

AXA goes green, again
There was further evidence in the past week that green bonds are a significant source of financing for Europe’s large real estate companies. AXA IM Alts raised €500 million in its second green bond issue of the same size so far this year for its flagship core real estate fund. The latest bond [read the full announcement here], has an eight and a half-year maturity, and a 1.25 percent coupon. And more issuance for the fund can be expected – the latest bond is the first of a new €3 billion, euro medium term note programme.

Timothé Rauly, global head of fund management at AXA IM Alts, said the issuance extends the fund’s average debt maturity, further diversifies its sources of finance, and significantly reduces the level of secured debt within the fund’s portfolio. The fact the bond was 4.6 times oversubscribed across 167 investors suggests investor demand for such notes is high.

Brunswick tops up
European managers continue to attract investor capital for property lending strategies. Among them is Stockholm-based Brunswick Real Estate Capital, which announced this week an additional SKr1 billion (€110 million) raised for its third senior real estate debt fund, which now stands at equivalent to around €1.3 billion. Among the investors was Swedish healthcare group Praktikertjänst’s pension foundation.

The fund is focused on Sweden, sustainable real estate and tenors of as much as 10 years [read more in our November 2020 interview with Pontus Sundin, chief executive of Brunswick’s debt division, here]. Sundin said the latest round of fundraising is evidence of increasing investor interest in real estate debt to complement more traditional fixed income, as they see the potential in sustainable, long-term commitments.

Evergrande survives, for now
The Evergrande saga rumbles on. On 22 October, the highly indebted Chinese developer narrowly avoided default with an $83.5 million interest payment on of one of its offshore bonds [read more courtesy of Reuters here]. However, it is not out of the woods yet – the next of a series of bond payments is due on 29 October and the company’s capacity to pay is unclear. This week has brought fresh concern about the Chinese real estate market, with developer Modern Land reporting in a filing it had not repaid principal and interest on senior notes that matured on Monday blaming “unexpected liquidity issues”, according to Reuters [read here]. 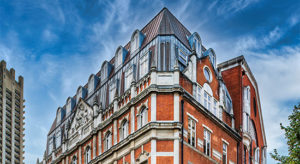 Apollo backs London revamp
Property investors are proving eager to transform dated office stock in prime locations into the sorts of workspace they believe occupiers will demand in future. Among them is UK private real estate firm Castleforge Partners, which bought 1 Golden Lane, a historic office building in the City of London, previously occupied by Swiss bank UBS, and plans to transform it with a redesigned internal structure, improved energy efficiency and smart technology.