Apollo hunts Italy’s distressed debt
US investment giant Apollo Global Management has its eyes on distressed real estate loans in Italy. So too does Illimity, a Milan-based digital bank that counts the acquisition and servicing of non-performing loans among its business lines. On 17 June, the two organisations announced they had joined forces to invest as much as €500 million in distressed Italian real estate loans in the next two years (read the full announcement here).

According to consultancy Deloitte’s Deleveraging Europe 2021 report (see it here), Italian banks are making headway in divesting NPLs. Deloitte says average non-performing exposures across the country’s largest banks fell to 5.2 percent in 2020, down from 7.3 percent in 2019. It also reports that total loan loss provisions for Italy’s seven largest banks amounted to €12.7 billion in 2020, up from €8.2 billion in 2019. By targeting NPLs and unlikely-to-pay loans of up to a single price of €50 million, Apollo and Illimity will be cherry-picking investments. However, they will be doing so in one of Europe’s most active loan sales markets.

AXA’s green notes
It has been a relatively busy year for green bond issuance in the European real estate sector. Last week, AXA IM – Alts became the latest property manager to raise finance through bonds structured to comply with sustainability criteria. On 17 June, the €137 billion investment platform, which was created by multi-asset investor AXA Investment Managers last year, announced that its flagship European open-ended real estate fund, AXA CoRE Europe, had priced a seven-year, €500 million green bond offering (read the full announcement here). The notes, the first to be issued by the fund, attracted strong investor demand, with the order book around four times oversubscribed and around 80 investors buying the notes. As Europe’s property companies aim to diversify their sources of debt through capital markets issuances, more are choosing to do so by tapping demand for green bonds.

A new era for UK retail parks?
Property investors are increasingly looking for out-of-town retail parks as shifting consumer shopping habits bring them back into favour. According to property consultancy Savills, prime UK retail park yields moved inwards in Q1, for the first time since Q1 2018, from 6.25 percent to 6 percent over the quarter. Recent UK transactions suggest investors, and lenders, identify this retail sub-segment as a post-pandemic winner. Last week, investment banks Bank of America and Morgan Stanley launched Agora Securities UK – a £211.5 million (€247 million) securitisation of debt backing a portfolio of nine UK retail parks owned by investment giant Brookfield Properties (see the pre-sale document here). The banks’ faith in investor demand for the notes – at a time when CMBS investors are particularly discerning about what they will buy – suggests there is renewed interest in a part of the retail market often once dismissed as dull and soulless.

No end in sight for sheds demand
The changing behaviour of shoppers across Europe, who are increasingly likely to buy on their phones rather than over the counter, is also shaping demand for logistics space – which lenders have proved more than willing to finance in recent months. According to new data from CBRE, rising e-commerce demand will drive the need for 300 million square feet of additional logistics space across Europe by 2025 (read the full report here). The consultancy said e-commerce sales are expected to increase by $298 billion from 2020 to 2025, having already increased by 150 percent across Europe in the past five years. In their hunt for core real estate, equity and debt providers alike will be aiming to capitalise on this growing demand for logistics space.

Healthy returns
The European Association for Investors in Non-Listed Real Estate Vehicles, better known as INREV, revealed that total returns from European non-listed real estate – based on asset-level analysis – reached 1.35 percent in Q1 2021. Although slightly lower than the 1.96 percent posted in Q4 2020, INREV said it was a third consecutive quarter of positive performance, supported by 0.42 percent capital growth. 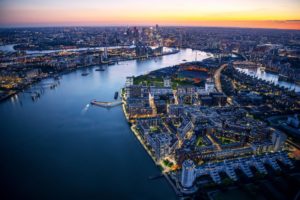 Docklands dwellings
The Irish developer Ballymore, in a joint venture with Singapore’s Oxley Holdings, is working on what is considered the final stage of a masterplan to transform an area of London’s Docklands into a thriving residential district. It has already delivered the Royal Wharf residential scheme across 40 acres of the Royal Docks, located along the River Thames in east London. It is now planning Deanston Wharf – a 768-unit residential scheme on an adjacent plot. Lenders have proved keen to finance residential schemes so far this year, and it seems Cain International, the privately held equity and debt provider, was keen to deploy capital against this scheme to create new housing stock in one of the last relatively underdeveloped corners of the UK capital. The firm announced last week (see here) that it is providing £170 million (€199 million) of finance for the project. Graeme Keable, principal with Cain, told Real Estate Capital more about the deal in an article which subscribers can access here.