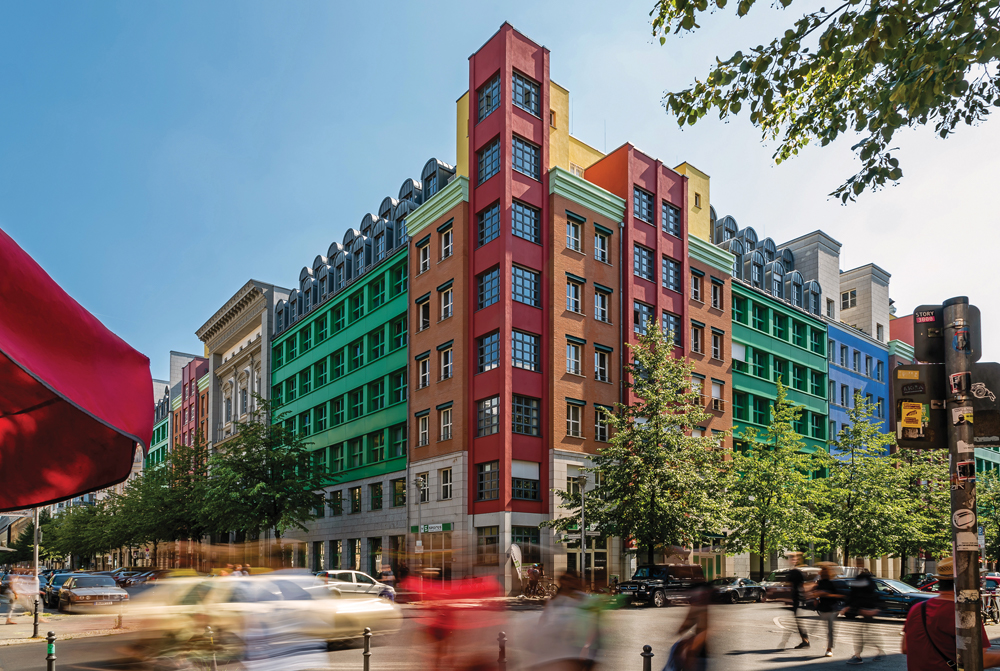 In April, Natixis Pfandbriefbank provided a €129.5 million loan to finance the purchase of one of Berlin’s most colourful commercial properties.

The German arm of the French banking group provided the loan to private equity real estate firm Henderson Park, which bought four grade A properties within the Schützenquartier office and retail complex in the city’s central Mitte district.

The Schützenquartier is considered one of the most important post-reunification developments in Berlin. Built in 1998 on land once occupied by the Berlin Wall, the buildings are near the historic Checkpoint Charlie and Gendarmenmarkt square landmarks. It was designed by Italian architect Aldo Rossi, also known for the postmodern San Cataldo Cemetery in Modena, Italy, with its cube-shaped ossuary.

The Berlin complex features four inner courtyards, including an octagon, and is recognised by its distinctive multicoloured facade. Henderson Park bought four of the 12 buildings in the seven-storey complex. Each is accessed independently and, combined, they offer 218,905 square feet of predominantly office space along with ground-level retail.

Henderson Park bought the buildings from Berlin-based Caleus Capital for just less than €195 million. The transaction marks its fourth deal in Germany in the last 12 months, bringing its portfolio in the country to a value of more than €500 million. The assets were acquired 27 percent vacant, and it is understood Henderson Park is in advanced talks with two further potential office tenants to lease up most of the remaining available office space.

Natixis’s loan included an €8.25 million capex facility to enable Henderson Park’s uplift of the properties. Henderson Park founder Nick Weber says the firm plans to consolidate parts of the offices and upgrade the overall quality and appearance of the building. This colourful quarter, it seems, is to be further brightened up.

Oct 2018: Tristan sells interest in the Schützenquartier complex for approximately €95 million to Caleus and its Singaporean joint venture partner GIC

Apr 2020: Schützenquartier is sold to Henderson Park for approximately €195 million, with debt from Natixis Pfandbriefbank