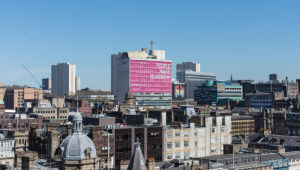 A pink-clad high-rise building in the heart of Glasgow’s city centre, emblazoned with the words ‘People Make Glasgow’, has become something of a local landmark. The Met Tower, a 14-storey former office building, gained its pink wrapper as part of a campaign ahead of Glasgow hosting the Commonwealth Games in 2014. The structure has stood vacant ever since. But Glaswegians will have to get used to a different, less-pink, view on its skyline, as the Met Tower is about to undergo a big transformation.

The landmark will soon match the vibrancy of its home city, due to a project supported with a £35.6 million (€41.8 million) loan from UK challenger lender OakNorth Bank provided in May. The capital will be used to support the acquisition and redevelopment of the former College of Building and Printing tower.

Led by property and innovation services provider Bruntwood SciTech – a joint venture between developer Bruntwood and UK insurer Legal & General – the project will transform the tower into a technology and digital hub, which will host a range of businesses and start-ups in the sector by offering 113,000 square feet of co-working, serviced and leased office space.

The ‘innovative tech cluster’ that the tower hopes to attract following its redevelopment will benefit from a shared breakout space on the ground floor as well as a rooftop lounge. Work on the Grade B listed office building, which was one of Glasgow’s first tower blocks, is expected to start later this year and complete in 2024. Bruntwood SciTech is planning for a net-zero transformation of the Met Tower as the project will retain as much of the tower’s “existing fabric as possible”, according to the firm, thus reducing the carbon impact of the redevelopment.

The redevelopment of the Met Tower looks to capitalise on the growing science and technology sector in Scotland’s most populous city. The sector was responsible for almost a third of all jobs in the city, according to research conducted in September 2021.

Kate Lawlor, chief executive of Bruntwood SciTech, says the transaction is perfect timing in an ideal location. “Glasgow has one of Europe’s most exciting, diverse tech and digital clusters with exceptional higher education institutions and clinical assets,” she says.

“The city’s science and tech sector is rapidly growing… making Met Tower perfectly placed to help create a hub in which these businesses can scale, co-innovate and thrive.”

The Met Tower has seen many plans for its future come and go, but Bruntwood SciTech’s vision of the building becoming the epicentre of innovation in Glasgow is just what the vacant landmark needs.