When it came to fundraising in 2017, real estate debt was the silver lining in a lacklustre year. In 2017, debt funds on a global basis accounted for 28 percent of the total private real estate capital raised, the greatest proportion in the period from 2011 to 2017 – up from 14 percent in 2015 and 18 percent in 2016, according to Real Estate Capital data.

Meanwhile, overall private real estate fundraising has been on the decline since 2015, when 282 funds amassed an aggregate $149.11 billion. By comparison, 168 funds attracted just $93 billion in 2017.

“There’s deeper and wider interest in the strategy,” particularly from US pension plans and Asian and Middle East sovereign wealth funds, says Doug Weill, managing partner at New York-based placement and advisory firm Hodes Weill. Much of the capital has targeted the US, given the depth of the market, although strategies in the UK, Europe, India and Australia have also raised money, he says.

The interest in real estate debt “is really driven, in part, by the return profile of being a lender versus being in equity,” says Weill. To achieve high single-digit net returns in real estate requires doing core-plus investing, which involves taking risk on the residual value of the asset, he says. However, with debt that assumes a meaningful equity cushion, the residual value should be paid off at par at loan maturity.

The focus on higher-returning, lower-risk investments is also a reflection of the current late-stage cycle. “If there’s a correction on the horizon, it’s good to be a lender versus an equity investor,” says Weill. “Increasingly, if a manager can position a debt fund to deliver eight-plus net returns, that’s pretty attractive in the current cycle, compared to taking equity risk.”

Meanwhile, more debt funds have been hitting the market as investors seek managers with a broader range of strategies. “A debt fund is almost a must-have right now,” says Niraj Shah, managing director at Rockwood Capital, whose firm has been investing in real estate debt since 2008 and launched its first dedicated US real estate debt fund, Rockwood Income and Credit Partners, in December 2016. “Investors like it when a manager has multiple offerings across the capital stack, from equity to debt… we’ve found investors often prefer a one-stop shop with various product expertise.”

According to Prashant Tewari, a principal at Cleveland, Ohio-based real assets consulting firm and multimanager Townsend Group, real estate debt strategies cover the entire risk-return spectrum – from senior debt to preferred equity to opportunistic debt – producing returns as low as 4 percent to as high as the mid-to-high teens.

While the first phase of real estate debt funds that emerged after the global financial crisis were opportunistic vehicles that targeted distressed debt and have been followed by a wave of senior funds in more recent years, the latest crop of real estate debt funds fall between the two on the risk spectrum and have become alternatives to traditional capital sources, such as commercial mortgage-backed securities and commercial banks, which had exited the lending business for riskier debt.

But while Tewari considers the proliferation of real estate debt funds to be a healthy development overall for the private real estate industry, he also believes the increase in such offerings to be cause for concern. “There’s a sudden rush to raise capital for debt,” he says.

Moreover, “there is more capital being raised by certain managers that don’t have the credentials to deploy the capital”, says Tewari. With some firms lacking the right skillsets or network to put capital to work, “they are putting capital into any deal that comes their way, but they don’t have the ability to take corrective action, because they’re not vertically integrated”, he adds.

Only the debt managers that also have a background in equity investing will be able to step in, take over the asset and recoup at least some of the capital invested if something were to go wrong, Tewari says.

Indeed, Weill currently estimates there to be about 90 real estate debt funds globally in the market. However, “there’s just a handful that are really getting traction”, he says. That select group have been consistent lenders throughout cycles and have platforms of scale, with origination, asset management and servicing capabilities under one roof.

Successful real estate debt fund managers will have the capability to do both a debt workout and a property workout on investments that go sideways, agrees Jim Blakemore, head of European debt at GreenOak Real Estate.

“I think a lot of those firms have people that have owned assets and understand how that all works and can execute the business plan once they get hold of the property,” he says. “I think something people should look at also is, within the lending team or real estate team, do they have experience managing troubled loans?”

At the same time, debt has the connotation of being lower risk than equity. “I think there are some people who are lowering their underwriting standards and it’s going to be a rude surprise down the road,” says Tewari. “Unlike in equity, if you lose out on one deal, you don’t have the ability to make it up with another deal. People are going to realise that their returns are lower than expected because there’s no way to come back.”

Blakemore concurs. “Getting your money back is pretty darn hard, and it takes a lot of people, it takes lot of expertise and a lot of time,” he says.

Blakemore, whose firm has raised three real estate debt funds, including GreenOak Europe Secured Lending Fund and GreenOak UK Secured Lending Fund I and II, says it has been worrying to see some firms outsource the servicing or asset management functions associated with the loans they originate. “We’re trying to do everything in-house, which may not be the most cost-effective way of doing it, but given the type of lending we’re doing, we really want to have control over everything touching the borrower, every process,” he says. 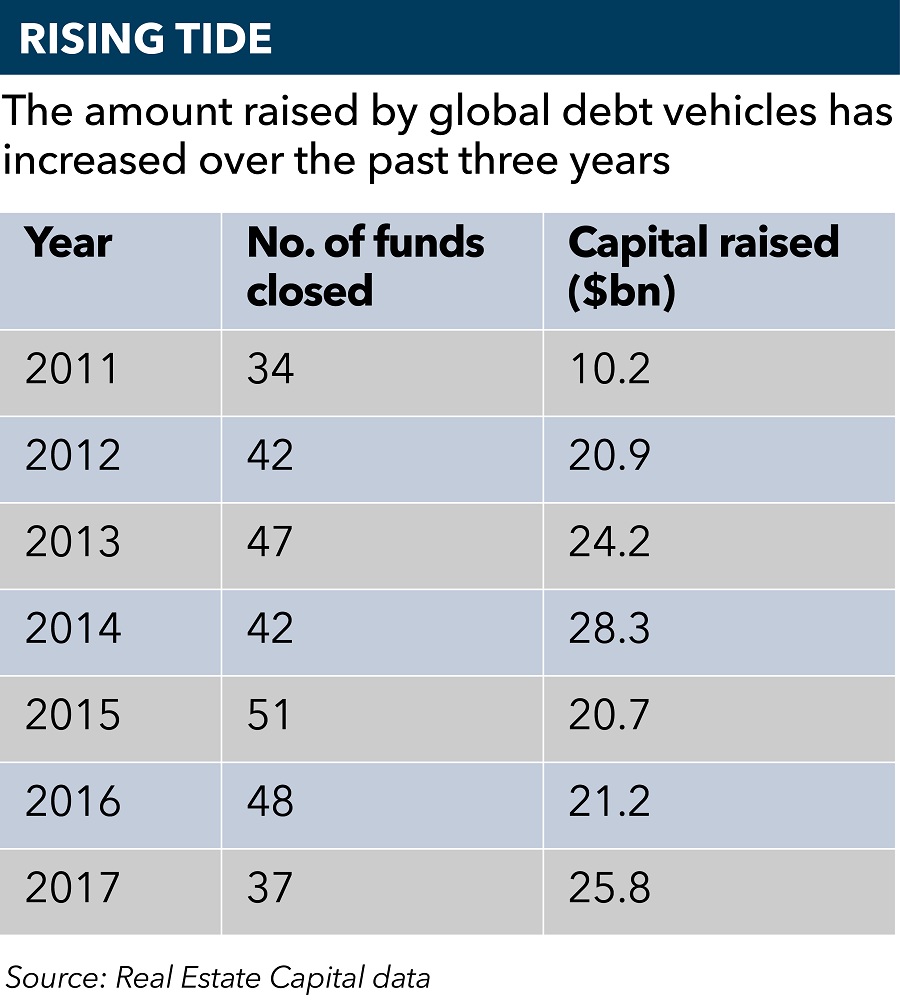 Other complications come on the fundraising front, since a credit strategy can be more challenging to market than an equity strategy. “It’s a strategy that straddles different allocations within an investor’s portfolio – credit, fixed income or special situations,” says Weill. “That makes the marketing process a bit longer and more complicated than for an equity strategy.

“We get the question often of, how should this be benchmarked? That’s part of the challenge – you can look at all these debt funds and they all have different strategies at the end of the day.”

For example, Rockwood’s real estate debt fund is unlevered and consequently has a lower return target than many competing funds. “We always get that question: Other funds with similar investments are showing low-teens returns, why are you in the high-single digits?” says Shah. “Investors are often focused on the IRR; however, it’s important to understand how a manager is getting to those returns.”

For example, one manager could be generating an average 8 percent unlevered return on its real estate debt investments, while another may apply 50 percent to 60 percent leverage to similar types of investments and achieve double-digit returns, he explains.

“It’s tough, just given where we are in the cycle with leverage,” Shah says. “With repo loans, there’s always mark-to-market provisions. It really is driven by a manager’s risk tolerance and fund objectives. With our particular strategy, we don’t want to be in a situation where we are rebalancing loans during market conditions we don’t control.”

GreenOak’s debt vehicles, which have a target of between 7 percent and 9 percent, are similarly unlevered, reflecting the firm’s European investor base for the strategy. “Most European investors and Asian investors do not want any gearing at the fund level,” says Blakemore. “They’re much more interested in the whole loan strategy.”

Real estate debt funds can also be harder to evaluate because of the complexity associated with such vehicles. “The number-one source of complexity is, you don’t know exactly what you’re lending against,” says Tewari. “This is the biggest risk that investors face and many managers can’t provide a straight answer, which is going to drive the biggest source of disappointment going forward. Even some of the managers themselves may not know what risks they’ll be able to tolerate.”

He notes that many higher-return real estate debt investments involve loans on transitional assets, which are most likely to suffer during a downturn. “If you want to hedge your bets because you fear a downturn, it’s exactly during a downturn that these assets can fail to perform.”

Another source of risk is funds using different loan-to-value ratios and lending standards, which makes it hard to compare debt vehicles with one another. A third risk factor that is even more difficult for investors to understand is debt service coverage requirements and terms such as covenants. “Those risks are just not well understood by many investors,” says Tewari. “People just believe debt is debt.”

He adds: “These are new products. Many in the market are not educated enough to understand all those complexities.”

Blakemore adds that one danger firms face is not properly understanding both the debt risk and the equity risk on an investment. “There are a lot of deals that are great equity deals that you probably wouldn’t want to be a lender in, because the outcome can be somewhat binary,” he says. “So, if the business plan goes great, you make a fortune. If the business goes not so great, then there might be a capital loss.”

Another concern is how hard a debt manager may be pushing on performance, Blakemore adds: “If the debt manager is looking for a lot of promotion on certain transactions, you can cut corners on location, asset class, asset quality and business plan, and you’ll have a loan that probably looks just fine until you want to get the money back.”

Tewari does not expect the frenzy over real estate debt funds to abate any time soon. “I think we’re going to see more and more aggressive strategies on the debt side as everyone competes with each other to try to claim to produce a higher return,” he says. “With many of our clients, we’re trying to manage expectations and avoid the temptation of trying to get into the mad race of the highest returns.”

He adds that many investors assume all debt strategies are similar, and are less discerning about the differences than they need to be. “We are actively pursuing managers with the right credentials and that we feel are going to invest this capital against acceptable-quality assets, instead of someone who invests against lesser-quality assets and pays you a higher return,” Tewari says. “That’s where we think the winners or losers are going to be decided.”