Sentiment among lenders towards European real estate financing conditions improved during Q2 2020, as covid-19 lockdowns eased, according to research by CBRE. However, the real estate consultancy warned that debt providers remain cautious, particularly about tenants’ ability to keep paying rent.

The findings were based on CBRE’s Lender Sentiment Indicators research, a series the consultancy ran between March and June. The data was compiled in lieu of CBRE’s quarterly Debt Map, through which it monitors debt terms across European markets, but which has been placed on hold since the onset of covid-19 due to the lack of new lending market transactions.

Through the Lending Sentiment Indicators, CBRE tracked a new set of metrics to monitor the factors weighing on lender sentiment. The data was gathered by the firm’s team of 35 debt advisory professionals, through regular communication with more than 100 lenders. Here is a rundown of the main findings:

Analysis of underlying financial benchmark markets, such as credit default swaps and corporate bonds, show significant volatility in the early part of lockdown, which has since settled. Corporate bond spreads widened in March, as lockdowns began, by around 100 basis points but have since stabilised at early 2019 levels. “This implies a potentially more stable basis for lenders to quote for business,” says Paul Coates, head of debt and structured finance at CBRE Capital Advisors.

The investment pipeline provides some hope

CBRE data reveal the hit Europe’s investment market took in Q2 – volumes were €44 billion, around half the level seen in Q1.

However, Coates argues this downturn is not comparable with the global financial crisis, with only two of the 24 quarters from 2008 to 2013 recording higher volumes.

Coates adds that his capital markets colleagues see a significant increase in the pipeline of assets being prepared for market, which could boost volumes in Q3 and Q4.

There are hopes for a securitisation rally

Lenders with originate-to-distribute models have been held back by slow loan syndication markets and a lack of commercial mortgage-backed securities issuance. But Bank of America’s return to the CMBS market with a new deal in July has improved sentiment.

“Anecdotally, there is little activity in club deals, but there are the first signs of primary CMBS issuance in Europe since the onset of the crisis,” says Coates. Bank of America Global Research says AAA European CMBS spreads were 170bps at the end of June, down from 275bps in early April, albeit up from 90bps at the end of February.

Lenders increasingly indicate they are active

Coates reports that, from CBRE’s conversations with lenders, most have moved beyond the “pause for now” stage and are taking a “flight to quality” approach as they aim to lend but against defensive, core assets. “We see the alternative lenders and debt funds most active, some emerging confidence in the investment banks – some for their own account, others for underwriting – and the commercial banks very focused on existing clients and more selective for new opportunities.”

There is greater clarity on pricing

CBRE notes improvement around sentiment towards loan margins and lender returns, with clearer pricing trends emerging as activity picks up.
“The soundbites frequently heard early in April and May of ‘25-50bps wider’ are evolving, and more precision is emerging,” says Coates. He adds that, for the best assets and sponsors in core locations, there has been a modest reduction in leverage, with pricing close to pre-covid-19 levels.

“Other sectors which have less visibility on resilience and timing of the sector recovery are still in price discovery mode. Perhaps the most encouraging is the confidence being shown with lending quotes on prime office transactions, with strong levels of liquidity for good sponsors and well-located assets,” he adds. 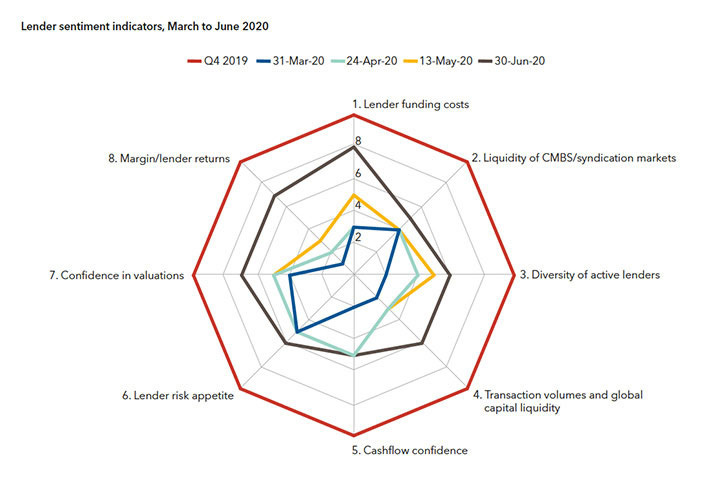 In terms of risk appetite, lenders are focused on defensive assets such as logistics, multifamily housing and data centres.

But Coates notes a slight relaxation of terms: “In general, we sense a tendency to be a little risk off on leverage, to the tune of say 5-10 percent lower LTV for senior debt quotes. Mezzanine and whole loans have witnessed a similar trend.”

There is more confidence in values

Coates says there are two elements to valuation confidence: “That uncertainty clauses are removed and that values have ceased to fall. Both are increasingly being met.”

He says uncertainly clauses have been removed in the UK on long income, industrials, multi-family and supermarkets, London offices and student accommodation, while the decline in capital values at the all property level has continued to slow, from a drop of 3 percent in March to a drop of 0.7 percent in June.

In Coates’ view, the results of the research show the biggest barrier to improved confidence and increased activity is related to rent collection and cashflow confidence.In the UK, 80-90 percent of office and industrial rent was paid by week three after the June quarter date, although the figure for retail, at closer to 60 percent, was much weaker.

“Q2 rent collection was roughly on a par with Q1 but confidence is fragile in the face of further potential shocks. For more cautious lenders there is the potential for a desire to see one or two quarters of improvement in this measure, which may put the brakes on increased traction across the other measures,” says Coates.

“Lenders most prepared to form a view on this measure – be that through a focus on sectors where payment is greater or information more transparent, or through skill and bravery – will gain a significant advantage over more cautious competitors,” he adds.