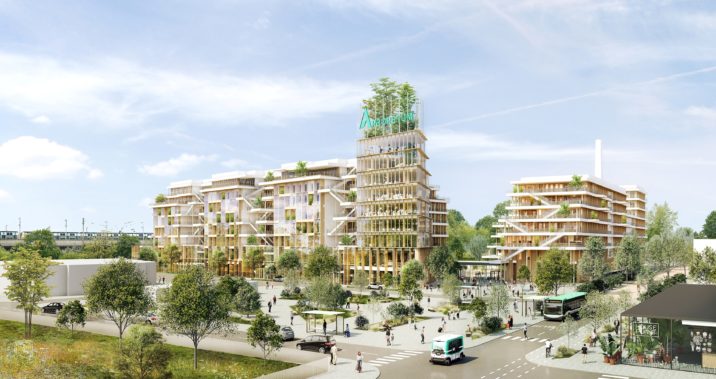 In June, one of Europe’s most ambitious sustainable schemes attracted €430 million of debt finance from lenders, including €200 million from Allianz Real Estate, the property arm of the German insurer.

A paper mill site on the banks of the Seine is to be redeveloped as Arboretum – a low-carbon, office campus for up to 10,000 people. The 1.4 million square feet complex, near Paris’s La Défense business district, is the largest office development to be launched in the Ile-de-France region with no prelets or end-investor since the Cœur Défense tower in 1997. It will also be the largest office development in Europe to be constructed primarily from wood. Development is due to begin in September, for delivery at the end of 2022.

“The superstructure of the campus is made of solid wood, which acts as a carbon-trap,” says Icamap investment director Laurence Desmazières. “Cross-laminated timber is used for floors and beams instead of concrete. With cross-laminated timber, real estate becomes a carbon sink.”

The complex will comprise seven buildings, five of which will be primarily developed from cross-laminated timber. Its backers have also committed to reusing as much material from the demolition of the former industrial site as possible. Decontaminated and crushed concrete will be used for paths and roads.

The goal of WO2, the scheme’s project manager, is to create a ‘post-covid’ office that promotes health and well-being. Facilities include a private park, sports centre and seven organic restaurants that will use fruit and vegetables grown onsite in an orchard and vegetable garden.

To ease any concerns surrounding the flammability of wood from prospective occupiers, Desmazières highlights how the cross-laminated timber is unidirectional and fire can be confined room by room.

2011: European packaging company Smurfit Kappa permanently closes its paper mill on the banks of the Seine in Paris

June 2020: A new investor pool, including Icawood and BNP Paribas, raises €650 million for the project. Debt is provided by Allianz Real Estate, an institution represented by AEW and Ostrum, and a BNP Paribas Asset Management fund

September 2020: Construction is due to begin for completion by the end of 2022